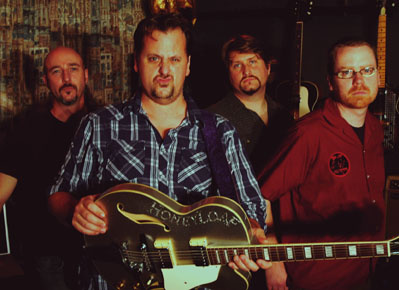 While there may be thousands of different of genres in the music world, and millions of different bands around the world, when you really stop to think about it there are actually only two kinds of music:

There’s music that just works as white noise in the background keeping you company on long lonely nights, and then there’s that special type of music that tickles your imagination, invades your pores, and begins to inherently feel a part of you.

The bad news is that kind of magical type of music usually only comes along once in a while; but the good news is that Honeyloaf brings you that invasion of the insidious but delicious kind of music you feel throughout your entire body.

And how did Honeyloaf even get to this mystical place?

Well it all started with Jason Ziebart having a dream, a harmonious dream.

Jason had the vision of performing with his own band since he was 7 years old rocking out to Elvis. And by keeping that vision clear, and through synchronicity, fate, the stars aligning, or whatever else you might call it … his band Honeyloaf was created.

As with most creations, especially the truly extraordinary ones, the start can be slow and winding.

What began as a husband and wife act of two soon morphed into a trio alongside Wynn Gogol. Then, as the three were working on their first CD and jamming at house parties, Murray Creed couldn’t help but join in simply because his kids were head over heels in love with Honeyloaf’s unique sound.

James Love was next to jump onto the Honeyloaf music train, coming from a big local cover band he knew a cool, new groove when he heard it. And as things transform and change like they usually do, and as Jason’s wife, Wynn, and Murray drifted off, and Ryan Hill and Dave Booth joined in, Honeyloaf became who they are today; the boy band.

But don’t let this all bad boy band façade of four fool you; there’s much more tucked away behind the smiling faces of these rogue rock stars. The deep, sensitive, heartfelt songs are sometimes hidden subtly under the guise of humour. The aptly named Peanut Butter; a simple, blue-grassy tune, Jason originally wrote for an all-girl band, is a perfect example of that. It just seemed to ‘stick’ to the ribs of these boys and so now it’s not going anywhere else.

And Jason certainly knows how to seduce a mic and no matter if they’re playing to an enraptured audience of one in an intimate setting like the Duncan Garage ShowRoom, or to a packed-out house in the ole Victoria V Lounge, every girl feels like he’s singing just for her. The melting subtleties of his deep voice will grab you, twist you around, and whisk you away into new musical memories.

With lyrics like clean up in aisle 5, to songs on heartache, road trips, kitty cats, guns and yes even hookers, there’s hidden meanings weaved between and under the sometimes simple yet profound collection of words Jason scribbles in his notepad, to later belt out with passion and feeling. His influences, other than just regular ole life, have come in the guise of a mishmash of the greats including Elvis, Buddy Holly, and Chuck Berry.

And even with drummer man Ryan Hill sometimes not even really listening to those words as he’s rocking out in his very own drum zone, “Hey man, is “Run, Kitty, Run” really about a hooker?” there is definitely something transpiring way beyond what you think you perceive and hear.

There’s an incredibly simple way to truly enjoy the complex sounds of Honeyloaf. Close your eyes, open your senses, and allow Ryan’s innovative style to blend amidst the words as he takes his beat with you into the depths of a yet unclassified genre all his own. He’s all rhythm and being between projects and sharing a connection through Jason’s work brought Ryan into the folds of the Honeyloaf family.

The rest of this unlikely foursome came together under the oddest, yet perfect mesh of disjointed, yet connected circumstances.

James Love and Jason’s kids went to school together.

Enticed from family obligations and now finding time to jam with Men Without Hats as well, James brings a certain flair and stage presence that would be notably missing. It’s mesmerizing watching him almost make love to his lap steel guitar, making you wish you were the strings being played under his seductive fingers.

And don’t let the unassuming nature of Dave Booth, the bass player, escape unnoticed either. His day job as a deliciously, delectable chocolatier seems to melt right into his jazz inspired/funk/groovy styling beat. Dave, the “Adam Clayton of Victoria”, is what brings the deep sounds of Honeyloaf all together in a toe taping, butt wiggling, feet stomping playground of reverberations that make your insides tickle and your heart giggle.

Their sound just works and it’s not all about testosterone ripping up the stage, although there’s lots of that. No, it’s about chemistry of the rockabilly kind and there’s something quite indescribable that just seems to meld together; infused like a great wine pared with a great meal and many other musical talents in the know, like the infamous Juno-award winning Jim Valance, sense it too.

Honeyloaf’s first rough CD was slipped to Jim through Jason’s boss who overheard their tunes blaring from Jason’s car one day during a lunch break. “He’s best friends with my cousin.”

This kind of favour can lead to broken friendships and disaster, but Jim heard one tune and has been their mentor every since.

“Say You’re Sorry is so different and simple; that song is killer. And Big Storm‘s writing technique is very cool.”  What more validation does any band need than these words?

Accolades from music reviewers like “Taxi’ read more like a fan letter than a review, “Holy shit I would totally buy this!”

Honeyloaf is a band whose time is now and it’s way overdue. Their years together are starting to gel and ferment like your favourite brandy, and that’s more than evident as their soothing sounds and roots rocking styling tunes serenade your ears making you feel warm all the way through.

So when the chorus of Say You’re Sorry sneaks into your drive to work when your mind has wandered or you when you find yourself humming a tune similar to Is Your Mama Home?, you’ll wonder, now where did that come from?

And when that happens, you’ll realize Jason’s dream is coming true and is being unwrapped before your very eyes like that unexpected surprise present you’ve always wanted. And since all indications point in the right direction, you know he’ll soon be realizing his dream of becoming a fulltime rock star and that will be no surprise to anyone.

Stay tuned in and tuned on. It’s going to be a hellova Honeyloaf ride.