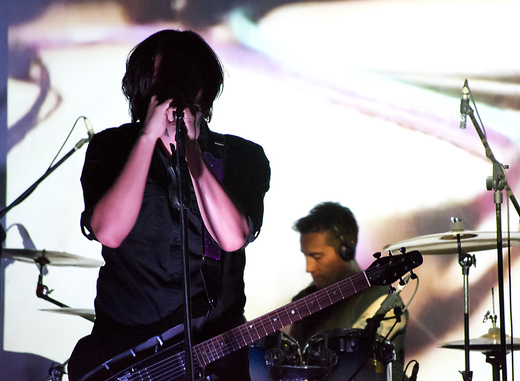 The curious thing about Bocanegra was that it was never meant to be anything serious. The post-punk/industrial bilingual group was originally conceived as a side project by members of this trio who were doing pretty well in their respective groups (Dolores Delirio, Almática and Astrea). Then one day, fate decides to toss a curve ball by putting those bands on hiatus and Bocanegra becomes the focus. That turned out to be the best thing for Carlos Bocanegra, Pablo Aranzazú and Josue Vásquez (though not so much for their other bandmates) who impressively charted the Peruvian Modern Rock charts for nine weeks in a row with their first single, "Love (the) Machine".  The video for the single was also on heavy rotation on MTVLA and VH1LA.

Their forthcoming debut album, co-produced by Martin Atkins (who’s collaborated with Pigface, Ministry, Nine Inch Nails, and other industrial, post-punk bands), is a 12-track compilation of tracks that straddle a fine line between hard rock, industrial and new wave.