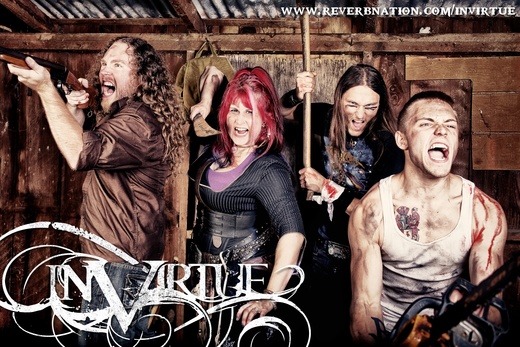 Once, metal had boundaries. Then, there was IN VIRTUE. In Virtue is a progressive metal band that is TRULY progressive. Not just "prog", not just a technically advanced or stylized band but a progressive band in the purest form of the word: ever-evolving, boundless and vast as the stars. At its core, the elements of melodic power metal and death metal are fused together under extreme heat and pressure to form a solid metal spine. The deft and deadly hands and feet are forged from equal parts heavy riffage, tasteful and expert leads, and thunderous interwoven contrapuntal basslines. Atop the creature's steel shoulders sits the dual heads, one of a firebreathing serpent, the other a mournful siren. But the blood that flows through the veins of this iron beast are a cocktail of elixirs ranging from folk to jazz to country and far beyond. No sound escapes the gravity of the massive supernova that is In Virtue.

The new album EMBRACE THE HORROR will be the culmination of the band's songwriting and performing skills honed over several years. At 60+ minutes, it is an epic masterpiece spanning many genres and styles and featuring instruments from live strings and horns to a live choir and hand percussion. Look for it late 2011.