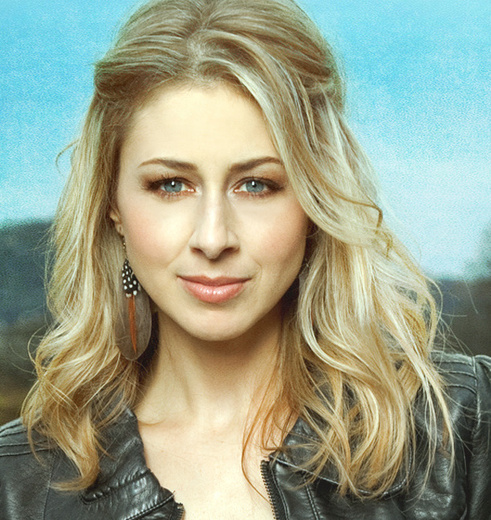 Ultimately, the most endearing aspect of Jaime Thietten (pronounced Teet’n) is not so much about what she’s accomplished or her powerful soaring vocal abilities, but more about her heart and soul, her exuberant love of life and her passion for the world around her.

Raised in Twin Falls, Idaho, the second of three siblings, with a wide-eyed innocence, and vibrant personality, music quickly became her best outlet for self-expression. She started singing at 2, and performing solos publicly by 13. During her high school years, switching from a small private school to a much larger public school, she struggled with self-esteem issues as most teenagers do, but again found hope and solace in her music. She soon discovered that through song, not only could she find meaning for her own life, but also inspire and encourage others. During her last year of high school she found herself wanting to become an EMT, but a teacher approached her and said "don't forget, I want your first CD when it comes out". Jaime remembers laughing at that comment, but it got her thinking; and later that year she realized that God had other plans for her. She soon began touring regionally (sharing the stage with Jay Leno, The Gaithers, Michael English, Phillips, Craig & Dean, and Avalon to name a few) and the message “...to Love Along The Way” has propelled her career, music and ministry throughout the 2000s.

During her career, now spanning over 13 years, Jaime has established an international touring base from New Zealand to Canada and throughout the United States. She has recorded a total of 5 albums as well as a powerful Music Video/DVD and CD package. Her strong faith has carried her through the highs of having a #2 radio single for her cover of Celine Dion’s “Because You Loved Me” and the lows of slower times between recordings and concerts. Through it all, Jaime has held to her message: “God’s love never fails us and because of that there is hope.” Her earnest desire to share that message in a more comprehensive way than ever before became the motivation to head back into the studio and begin work on her 6th album.

The final product, Love Along The Way, produced by Shaun Shankel (Natalie Grant, Plumb, For King & Country), brings together a collection of songs that encompass not only her desire to encourage others, but also a look into the heart of a woman who has experienced her share of pain. Jaime’s voice pulls the listener into the intimacy of struggle in a way that only one who is acquainted with pain can. Her husband’s battle with alcoholism, her parents’ divorce after 37 years of marriage and the struggle to conceive a child of her own, are the experiences that Jaime draws on to weave themes of hope, forgiveness and encouragement into every track on the record. From the anthemic balladry of “Chasing Me”, one of Jaime’s favorite tracks, whose co-write credits include Meredith Andrews and Shankel, to the quiet assurance of “Anxious Heart”, the lyrics speak of an enduring hope that often exceeds our human understanding.

Shankel describes Jaime as “one of the best vocalists he has ever worked with” and was particularly impressed with her focus and work ethic: “The wonderful thing about Jaime is that she is an incredibly hard worker; she embraces the growth that happens when you’re trying new things in the studio and goes and does the work.” Her ability to keep things moving helped the recording process move along with ease. Shaun remembers: “Because Jaime is so great at trusting in the team around her to do their job, we had been able to establish a wonderful level of trust early on in the recording process. It was because of that trust we had such synergy and the songs flowed out of us so effortlessly.”

“It’s A Good Day”, the lead single off the album is a happy, acoustically driven, piece of ‘ear candy’, as Jaime lovingly calls it. It offers a powerful reminder to live life in the moment: “It’s a good day, a good day to be alive. So let’s do more than just survive” the cheery anthem urges, and that is exactly what happened the day it was recorded. Jaime recalls, “I was so worried when I went to bed the night before knowing we still had a whole song to write and record and only one day left to do it. I prayed that God would bring us the perfect song and He showed up in a huge way. We truly did exactly what the song encourages us to do and lived in the moment. What I assumed would be a filler song for the album ended up being the first song we would be releasing to radio!”

Although the beauty of life and the blessing of hope are the essence of this record, these themes become even more compelling when they shine their light into the darkest places of the human soul. “My Chance” came to Jaime back in 2008, after a time of serious prayer asking God for direction in her career. “I very clearly heard God say ‘I want you to be a voice for the unborn’, and I was floored. I wasn’t even sure I knew how to go about that until a few days later a friend who had no idea God had spoken that to me, sent the lyrics for ‘My Chance’…on my birthday! It was at that point I knew this was supposed to be a part of my ministry.” The powerful message that ‘there is no such thing as an unwanted child’ is central to the narrative of Jaime’s life and “I Would Die For That” is the piece of the record that tells that very story. Originally written by Kellie Coffee (When You Lie Next To Me) as an autobiographical account of Coffee’s own struggle to conceive, the song was intimidating for Jaime at first. “I didn’t know if I could record it and if I did, I didn’t know if I could sing it live. It is painful and hard to share that piece of myself with a lot of people, but I have slowly begun to incorporate it into performances at adoption conferences and benefits and I’ve been able to see how the song has blessed those travelling this road.”

Other album highlights include a cover of Peter Cetera’s “One Clear Voice” and “Yesterday’s News”; a song written by Jaime’s husband based on an encounter with a homeless man that they had several years ago. “We were headed to a Halloween party on a bitter cold night when we saw a man who had newspaper tied to his feet for shoes. We were in such a hurry that we allowed him to walk right past us and we didn’t do a thing to help him. That image haunted us for weeks and since there was no way for us to go back, I asked my husband to help me write a song about it in hopes that it would inspire others to be courageous and not shy away from offering help in the face of great need.”

“You Are” and “Surrendering” round out the album’s offerings with the simple reminder that God is in control and because of that, we can surrender and allow his love to lead us to something beautiful. “My hope for this record is that it brings joy, peace and motivates people to let love be what drives them to meet the needs of those that are hurting…the title of the album is exactly what I want this record to convey.” As Jaime shares her heart and her story through this compelling collection of songs, we are reminded by her music and her message, that only in true surrender can we experience Love Along The Way.