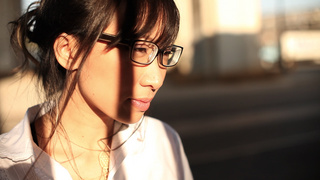 Listening to singer-songwriter Jane Lui’s music is like watching a Michel Gondry film. Her instrumentation and vocalization have a whimsical, homemade feel that is inventive, magical, masterful and intimate. Jane integrates left and right brain to produce her own videos and play 14 instruments. “You’re poor in college -- don’t have stuff, so you make it up."

True to her independent spirit and mastery of choral music, Jane is largely responsible for her own sound. I’ve never worked in a huge recording studio,” says Lui, “I’ve always had a small board and moved wherever I needed to. On location, the sound lives more vibrantly in 3-D and it has become my favorite way of working.”

Goodnight Company, Jane’s third album set for digital release October 5, 2010 and on CD, January, 2011 builds on her previous successes with debut Teargirl and 2008 San Diego Awards Best Recording Nominated follow-up, Barkentine. Using PledgeMusic.com, Lui raised over $11,600 in two months to fund the album. “I couldn't believe how much people wanted to help and it’s made the project more real now that I’m responsible to my fans."

Jane’s love story with music began at four when she started studying classical piano, listening to tapes and the radio. “Singing made me feel useful." Disinterested in narrative or correct grammar, Jane prefers nostalgic impressions.

She follows her intuition. “I go by feel a lot more these days. We followed our instincts making Goodnight Company.” Critics liken her to Joni Mitchell, Fiona Apple, Cat Power, and Rufus Wainwright. One could add Tori Amos, Norah Jones, Crystal Gale and Queen. She has opened for Jason Mraz, Vienna Teng, Jay Nash, Jim Bianco, Kate Earl and Tom Brousseau among others on national, Canadian, Australian and UK tours.