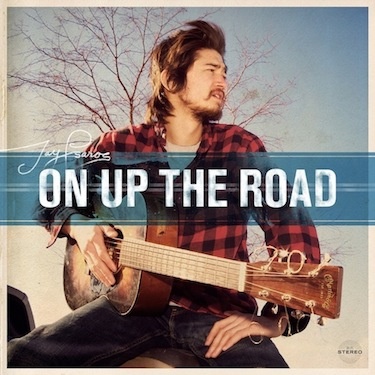 New England Songsmith Jay Psaros grew up in Weymouth, just 15 minutes south of Boston. After some years in Vermont he returned to the South Shore and began his career as a songwriter. Quickly recognized by WERS 88.9 FM as an “Artist on the Verge,” it didn’t take long before he earned a reputation as one of the regions most unique songwriters and has since been earning his keep on a national level. Spending months on the road each year, Jay has been earning praise and recognition across the country for honest songwriting and strong guitar playing. Jay released his first C.D. “Tripping and Running” in 2010 which was called one of the “Top Ten Local Albums of 2010″ by the Patriot Ledger. The combination of rootsy acoustic picking and alt. rock jamming displayed the versatility of Jay as a songwriter and musician as a whole. Recently, Jay has just come home from almost four months on tour supporting the release of his latest album “On Up the Road,” which is a “more polished roots-based dragnet of various Americana music genres than his debut.” The sound is “eclectic, sometimes poppy and downright danceable.” Performer Magazine called it a “Vital addition to one’s record collection.” Jay’s unique acoustic guitar playing, which serves as the foundation of much of his material is at the core of his music. Whether it be a solo live performance or in the studio his interwoven melodies and picking patterns distinguish his sound from the rest. Stay tuned. 2012 promises the release of his third album, an acoustic E.P. and the release of a book documenting his time on the road as an independent artist.