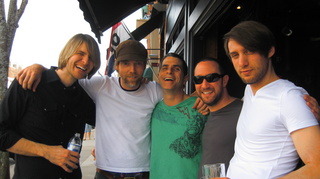 Jo Henley is not a person. Rather, Jo Henley is a Boston roots-rock band formed by longtime musical collaborators Andy Campolieto and Ben Lee, known for their unique blend of rock, folk, country, and bluegrass that their fans affectionately refer to as “new roots.” Inspired by everything from old-timey music to modern arena rock, from Hank Williams to Bruce Springsteen, Campolieto’s and Lee’s mutual love of all forms of American music shines through in Jo Henley. Michael Hochanadel of the Daily Gazette says, “It has guitars, fiddle and a spry rhythm section with a thumping lope. And it has really, really good songs.” The reference is to 2006's debut EP Long Way Home, but it's a description that reflects the very essence of the band. Live, Jo Henley is known for exciting, high-energy sets that showcase their carefully crafted songs and sparkling instrumental prowess.

In 2008, Jo Henley recorded and released their first full-length record, Sad Songs and Alcohol. A 12-track collection of tattered tales of lost love and broken dreams told against a backdrop of acoustic guitars, fiddle, mandolin, banjo, train beats, and weepy steel guitars, the self-released album found Jo Henley in top form and sent ripples throughout the roots music scene. Sad Songs and Alcohol caught on with listeners across the country, spending close to 6 months in national Americana charts' (AMAs) top 100–-without any label support. Over the next year, the band toured up and down the East Coast and out west to California, building a passionate fanbase along the way.

For their followup to Sad Songs and Alcohol, Jo Henley decided to capitalize on their quickly spreading buzz. They took their best material new to date, teamed up with producer Rob Loyot (Girls, Guns & Glory), and swung for the fences. Having long since wanted to bridge the rootsy Americana sound they've become known for with their love of jamband music, Campolieto and Lee turned to three longstanding members of Phish’s Trey Anastasio’s solo band: drummer Russ Lawton, keyboardist Ray Paczkowski, and bassist Tony Markellis, a versatile backing unit that Campolieto fondly compares to as the modern-day The Band. Jo Henley’s own Jordan Santiago rounds out the record’s core lineup on fiddle and mandolin. Featuring 11 original heart- and road-weary story songs that showcase an ensemble capable of shifting from straight-ahead rock to honky-tonk to R&B on the drop of a dime, Inside Out boasts the kind of inspired songwriting and musicianship that is expected to put Jo Henley squarely on the national map in 2010 and beyond.

In the meantime, you can find Jo Henley–-Campolieto, Lee, Santiago, bassist Jeremy Foti, and drummer Mike Dingley–-performing up and down the East Coast, out west, and in a town near you.