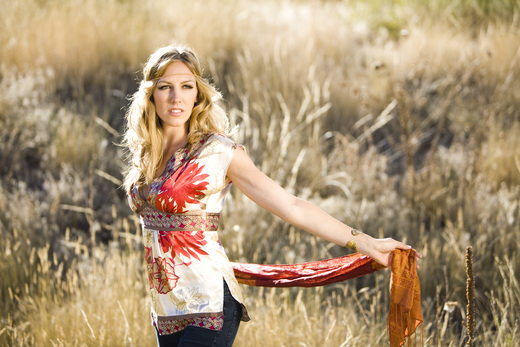 Katey Laurel’s emergence as a singer/songwriter powerfully straddling the line between Triple A and Adult Contemporary formats will make you think twice the next time you see the kid in the band carrying that seemingly cumbersome French Horn.

Laurel’s classical mastery of that instrument earned the Denver based performer a scholarship to the exclusive private Huntington University in Indiana, but her passion for expressing herself through songwriting with acoustic guitar and piano ultimately led her home to Colorado. She has since performed multiple venues (The Walnut Room, Soiled Dove Underground, Gothic Theatre) and won numerous accolades in high profile songwriting competitions. Laurel follows her well received debut studio album Upstairs, Downstairs with From Here, a compelling new eight song EP produced by renowned artist/producer Neilson Hubbard (Glen Phillips from Toad The Wet Sprocket, Kate York).

From Here’s first single “The Wheel” is featured on the respected A Taste of Triple A sampler, considered throughout the radio industry to be a strong indicator of the next “big thing” in the format. Being chosen for this compilation is simply the latest career coup for Laurel, who was a finalist in the Tucson Folk Festival, a winner and alternate in two categories of the Walnut Valley Festival NewSong Contest in Winfield, KS and a showcase artist selected for the Midpoint Music Festival in Cincinnati, OH. Offering the perfect blend of “catchy” and “intelligent,” the multi-talented performer’s music has been featured as part of Microsoft Windows 7 “Playlist 7” and Heineken “Ultimate Playlist” sponsored song programs and she was one of 7 national finalists in the Nine West “Voices of Vintage America” contest.

Her fan base has broadened as she’s shared stages with Katie Herzig, Matt Morris, Bill Mallonee, Braddigan (of Dispatch), The Bittersweets, Trevor Hall, Reed Waddle and Eilen Jewell. Laurel has also been a featured guest artist on Denver’s 9 News Peacock Café, Fox 31, Channel 2, KRFC Ft. Collins Live at Lunch and Boulder’s KGNU Kabaret and Castle Rock radio shows. Her songs have been aired on Alice 105.9, 97.3 KBCO, 99.5 The Mountain and other stations.

All of this is a long way from a fascinating, vagabond-like childhood worthy of an adventure novel, but always full of love and incredible music. Up until the age of four when life circumstances landed her family in small town Colorado, Laurel lived the footloose life of a seasonal migrant’s child, climbing apple orchard ladders, digging in the dirt and playing Lincoln Logs while her parents planted trees or picked fruit everywhere from Washington State to Georgia. Her free spirit and variety of musical tastes and styles began during her childhood in the ‘80s in a Volkswagen bus, a teepee and a one-room log cabin with Fleetwood Mac, Eagles and Emmylou Harris spinning on a record player. Her parents loved classic rock and bluegrass, but during college—even while majoring in French Horn Performance—she gravitated towards alternative rock and also formed a folk-rock girl group called Alabaster.

Laurel’s early goal to play French Horn in an orchestra on movie soundtracks had a unique, indirect influence on her approach to the making of From Here. “My songs have always been deeply personal and introspective,” she says. “With Neilson helping me choose my best songs and liberating me to focus on the writing and singing, one of our main goals became to put together sounds that would provide the right vibe for film and TV. I have shifted gears, but my dream remains the same—to create music that helps set the tone of life both on the screen and off. On Upstairs, Downstairs, I ended up choosing from a variety of sounds and styles that I identified with as a writer, while From Here has a more cohesive, consistent flow. The album title reflects my love for this project, and the hope and potential surrounding it. I’m saying that this is what I see from where my life is at right now—and it’s a good place.”

Laurel is such a heartfelt songwriter that even her lightest pop tune—“The Wheel”—is a deeply metaphorical statement about the reality of relationships. Like the structure of a wheel, if one part breaks, it affects the operation of the whole mechanism. More specifically, the track draws to mind images of a minor wreck (think bicycle), and emergency response vehicles coming to the rescue. The title track “From Here”, featuring Katie Herzig’s vocals on the bridge, is a deeply introspective song. Her lyrics ask the universal question “Is this all there is?” and wonder why we fail to see life’s many blessings. She explores the possibility of “the other side” and asserts her belief in a spiritual realm. Matthew Perryman Jones’ voice blends beautifully with Laurel’s on the playfully rhythmic, folk-pop influenced “Everything I Love,” which the singer describes perfectly as “a cute, happy sounding love song about how a person makes you feel when they hold your universe in their hands.” She uses noisemakers and bells to illuminate the joy, which also emanates from lyrical references to firecrackers and the deep blue sea.

“As enjoyable as it is to write and record in the studio, I love connecting with people in a live setting,” Laurel says. “Seeing people have a good time and hearing how my songs touch their lives makes my day. Making music is about the fun of performing but also about making that universal connection with the audience. Then there’s also the spontaneity factor because the way I perform a song is never the same twice. It’s always a little surprise to see what version comes out, and that keeps performing fresh. I also love the excitement that comes with writing new music. I am so fortunate to have the opportunity to reach more people, including young kids, with every new release and performance onstage. It’s about appreciating the little moments day to day while moving forward to reach my musical goals.”