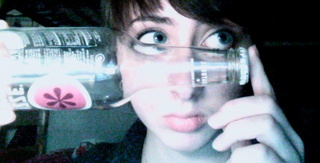 Kelly Izzo is a singer/songwriter born and raised in Brockport, NY who is now attending the Music Conservatory at SUNY Purchase. She has written over 200 songs since September, has been playing shows in and around NYC, and was named Ultimateguitar.com’s featured unsigned artist for November 2008. Kelly was recently honored with a third place win in the Woody Guthrie Songwriting contest and the opportunity to play a set at the Woody Guthrie Folk Festival on July 11th. She is so excited to travel to Oklahoma to play at this event!

In Rochester, she has played at The Mez (kicking off last year’s Mezapolooza), The Park Avenue festival, The Brockport Summer Arts Festival and various coffeehouses in and around the area. During her senior year of high school Kelly organized the "Rock for Awareness" concert for Amnesty International to raise awareness and promote civil rights in Tibet.

Kelly found her love for performing at a young age. She grew up in a dramatic family, both of her parents are theater teachers/directors, and was exposed to theater and music early. She was involved in various musicals and dramas throughout middle and high school and performed in many talent shows as well. She picked up the guitar at age 12 and hasn't stopped creating music since.

Kelly’s musical style, though reminiscent of Joni Mitchell, is uniquely her own. She sings with a clear, full soprano voice. Her songs are various; influenced by pop, folk, indie and the blues. She is an exceptional poet and has made a strong reputation for herself with her sensitive and imagistic lyrics. She recorded her first cd, "Under the Lens" at age seventeen and is currently back in the studio working on her next cd.