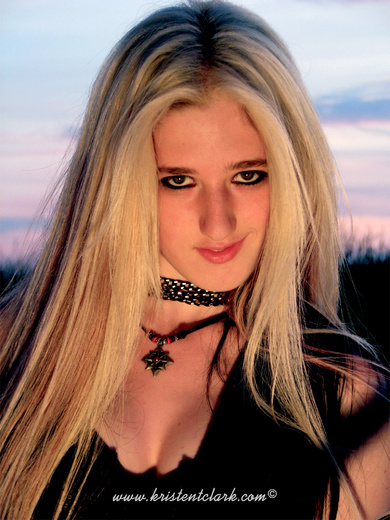 Nobody should try and tell guitarist Kristen T. Clark that she can't do whatever it takes to be the best. Only 19 years old, this young Canadian rising star and recent graduate of the Audio Production Program at Toronto's prestigious Harris Institute has already gained the attention of the Canadian music industry and won several impressive awards, including MusiCounts ‘Fred Sherratt Award’ (bestowed upon her by the Canadian Academy of Recording Arts and Sciences), along with nominations for Rising Star Award and Guitarist of the Year Award at The Wire Awards, in her home town of Peterborough, Ontario. She has also earned numerous musical scholarships; such as the one she was awarded in 2010 to attend SongStudio, a week-long professional songwriting workshop in Toronto founded by Rik Emmett (Triumph) and Blair Packham (The Jitters).

"Winning the scholarship to SongStudio changed my life drastically," says Clark. "My songs had been recognized as good! I was introduced to the professional music industry. I was only 14 and I was the youngest one there. Blair Packham is a mentor and his input is invaluable. He was very involved in every aspect of SongStudio and genuinely cares about growing musicians, and his direction has had a huge impact on the path I have walked. And what was great about Rik Emmett's workshops was his brutal honesty. He was not afraid to point out flaws, you got the good and the bad, not just suggestions for improvement. He is very real, very humble, and easily one of the most kind and collected people I have ever met. Rik was one of my idols growing up, and my respect for him has only increased."

Kristen T. Clark has been around music all her life, first as a singer (and country yodeler!), but something significant happened on her sixth birthday when her parents gave her her first guitar. While fascinated with it, she says it took her a full year to get up the nerve to start learning how to play it.

"It was a child size Sierra acoustic," says Kristen. "I was already singing and trying to write songs, and I guess my parents knew having a guitar was necessary more than I did at that point. The learning curve is what delayed me, the perseverance, dedication, pain, and frustration required was too much for 6 year old me. My mom was my first teacher and taught me the basic open chords and how to put chord symbols with lyrics to write simple songs together. She got me through the complete beginner stage."

Having grown up a country music fan, performing in local festivals and nursing homes, her prowess on the guitar continued, and she slowly began to try out her own songs. She has since evolved, as a young adult and with a switch to electric, toward a more rock style.

"As I wrote songs, I tried to emulate the stuff I heard on the radio," says Kristen. "I was a country girl and that’s all I knew how to be. As I grew, my writing and guitar playing abilities improved and I was exposed to new types of music through people at school. I wanted to embrace my new abilities in my songs, and it started to change the outcome. I started to get comments like, 'Great song, but I wouldn’t call that country.' In high school I got enthralled with progressive metal and the musicianship involved. I shifted my goals. I established my own style. I never really liked the cowgirl hat and boots anyway, getting away from that felt like finally letting people see the real me. The change was less a conscious choice to do things differently, and more an accepting that I feel more comfortable doing things my own way. It felt more like who I am."

Clark is rightly proud of her ever-evolving guitar skills, and the fact that she has been playing her own lead solos and fronting a rock band for several years. She admits to being influenced and inspired by guitarists such as Rik Emmett, John Petrucci, Misha Mansoor, Brad Paisley, Keith Urban, and Guthrie Govan, all of whom she admires for what she calls "speaking through sound."

"Their playing is so emotive that it conveys more than just the melody in rhythm over time. They have the mad techniques down and their playing is just raw emotion. You feel them. I think they achieve a great mix of technical proficiency and the appropriateness of a melodic phrase. The melody of a solo becomes the lyric, and it better mean something."

She's come a long way from that Sierra acoustic, and today gets her electric guitars through an endorsement deal with Carparelli Guitars, along with a similar deal with Road Rage Pro Gear, and her curiosity continues to drive her virtuosity as a guitar player.

While, even in 2015, being a woman in the music business continues to present challenges, Clark says it's nothing that she can't overcome. Having grown up with few female icons or mentors, she has always forged her own way.

"Mentoring is important regardless of gender," says Clark, "but a positive inclusive environment is just as important. When learning, you don’t know what you aren’t aware of and you can only push yourself so far on your own. But don't wait for a mentor to come along, find out who’s doing something right, and then find out how. When I discovered Orianthi, I thought it’s awesome that she was representing advanced female guitar playing, but her presence then clued me in to the lack of substantial female guitarists. We need more wicked female guitarists in the spotlight to broaden the scope of what girls can do. Maybe then I would have been more ambitious about the guitar when I started, instead of picking up the pace years later."

Having accomplished so much herself, Clark tries to give back to the community, particularly to young female guitarists who themselves might need a mentor. One of the ways in which she's helping is by being a Team Leader at the Rock Camp for Girls in Peterborough. Clark first attended as a young student before being asked, eight years later, to come back as team leader, teaching guitar, songwriting, and other valuable skills. She's now on the Steering Committee, year round, helping organize the RC4G behind the scenes.

"It’s amazing to be on the other side, after going through it myself," says Clark. "Watching kids achieve something so great, so quickly, that they didn’t think they could do in the first place, gives me unusually large amounts of pride. Girls Rock Camp isn’t just for girls to be some girls only club. It’s providing the encouraging environment for girls to not feel intimidated. We want them to feel safe and confident to be themselves and take risks, and I’m honoured to be a part of the nurturing of a growing force of rocker girls! The trick is for girls to just go ahead and DO the things they’re being told they can’t. What’s sad is that many girls take these semi passive-aggressive opinions as fact and give up before even attempting to start, which just perpetuates the inequality. Instead of being like, 'Oh, that sounds hard, I can’t do that,' girls need to be like, 'What makes you think I can’t? Let me show you I can.'"

Kristen T. Clark's young career is a living example that talent, hard work and fearlessness can open doors. Already one of Canada's most promising rising stars, she's finally ready to relieve her parents, and acquire a professional manager.

"Progressing through the music industry for a decade has been difficult with just the efforts of my parents and I," Clark admits. "We’ve had to learn about the administrative and management responsibilities just by observing and applying. I’ve learned a lot, but have still never had the support of professional management. I’d like to change that!"

With the wind in her sails from all of her teachers, mentors and loved ones, and a growing fan base, Kristen T. Clark continues to define herself on her own terms.

"Musically speaking," she concludes, "I’m still discovering that as I write more songs I don’t want to be limited… I want to do it all, because why not?"

For bookings or press, email kristenclark8@hotmail.com.