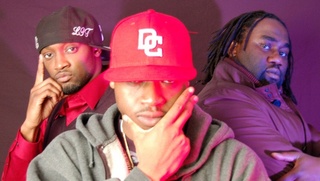 LPF is a DC area(Langley Park, MD) Hip Hop group who has performed in a number of local venues such as Artmosphere, Pure, The Velvet Lounge and The Bohemian Caverns. They have also performed several times at the legendary Pyramid night club in New York City. The group is comprised of three members who have been performing as a unit for seven years. These members are N8, KingNab, and Mustafa. Last year, they independently released their third album, "We Won’t Die" and are currently working on another.
What makes LPF such a unique group is that they envelope elements of "old school" rap with new style Hip Hop through the group’s special combination of selective voice distinctions. This results in a harmonic flow, full of rich and satisfying verses. Nate’s raspiness and spitfire delivery, Mustafa’s commanding voice, and Nab’s poetic vocals make their music an interesting blend as they are placed over contemporary tracks which still hold the "feel" of underground rap but yet have evolved into contemporary sound. Through their performances, these three come alive with an energy which permeates to their audiences and brings forward a consciousness reminiscence of earlier artists of this genre.
Much of their music centers around a variation of tracks which spread the creativity of the styles and beats of what make Hip Hop so appealing to many generations and cultures. Some examples include, the conscious title track of their latest album (We Won’t Die), a playful dance track, (Supafly Dude) and a new track, (Let Your Love Live) which is a radio friendly song containing R&B guest performer Champagne providing the rich vocals for the chorus as well as one of the verses.
The goals of LPF and its supporters are to bring the culture of Hip Hop to the DC Metropolitan area and inspire and promote many other local R&B and Hip Hop artists to showcase their talents to the world. Hip Hop as an art form, has become a geist of sorts, which seems to travel from region to region as time moves on, and society changes. What began as a musical outlet for urban expression in New York City, has now transformed across many different regions and cultures, including here in DC. LPF encourages people of all backgrounds and areas in which they live in, to place their own unique and special stamp on the world through the love of this music.