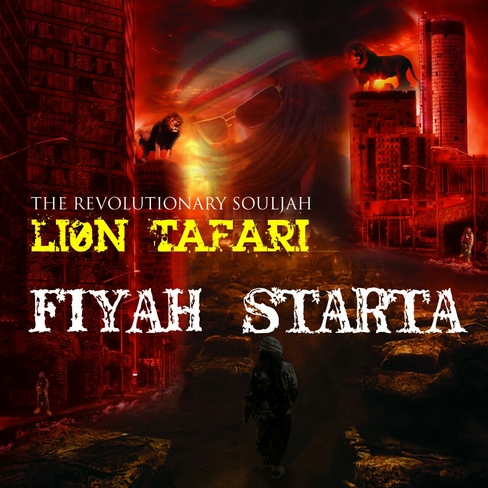 Lion Tafari - Birth name Demetrius Durand was born April, 22,1980 on the Island of Dominica. Music was forever apart of his life, as a youth he played various instruments from the flute, guitar & harmonica at various church functions. While growing up his interest lead more towards singing, taking part in school talent shows or simply being in the hallways with friends, at recess chanting a few reggae tunes.
In his mid teens he relocated to the U.S. Virgin Islands, St Croix. After settling he made new friends who shared the same interest, music was not Lion's only interest, he also loved playing cricket and football, known to some as soccer. But his first love will forever be his music.
The roots, behind his Revolutionary style of singing stemmed from becoming a sole member of the Nyabingy Tribe, of the Rastafarian family on the island of St. Croix. Giving birth to the inspiration for his music. It was only when he came to Atlanta Georgia, his love for music grew even stronger. The endless opportunities of being a professional reggae artiste were promising.
Having numerous performances and interviews such as The Lightening Show with Danger Marcus for www.daflavaradio.com in his independent career, he is on his way to the major leagues. The Hollywood Music in Media Awards, in Los Angeles California, has nominated Lion Tafari for Best Reggae Artiste twice in the year 2012 & 2014 also the 2014 International Music & Entertainment Association Awards Ashland Kentucky Recently elected
Lion Tafari the Winner for Reggae Song of the year he is also the Winner for Best Reggae Song of 2014 by X-Pozing Music Awards Chicago in 2015 he won two Awards at the Akademia Music Awards Los Angeles California Best Reggae & Best Rap/Southern a collaborative track with Hip Hop Artist MCJ
Lion Tafari's mission is spreading the message of culture and awareness to the world; he hopes to graduate from an independent artiste to a major international recording artiste. The Future is bright!