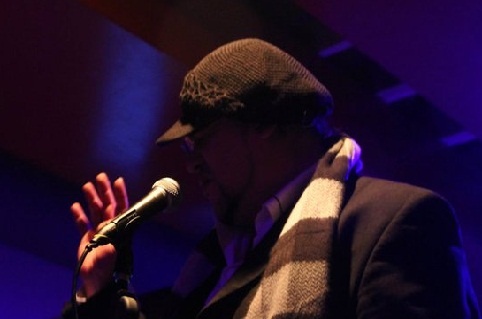 About Mannie The Poet

Born in December of 1973 screaming out of the womb into the belly of the beast known as Brooklyn, NY, to parents who where committed in a holy war at home. His mother a native of Berlin, Germany a Christian, his father hailed from Ponce, Puerto Rico a Muslim, needless to say Mannie was born into turmoil.

At an early age Mannie knew that he needed a stress reliever, but growing up in the projects left for empty thoughts that could only be released when harmony and agony collide. Not proud of his past of being a street pharmacist or the fact that he had spent his youth as a common hood he began to write his thoughts to paper but felt that it was not to be shared. Denying his passion for poetry rap became his outlet. But after a few short years, Mannie felt that there had to be more to those words in his notebook. It wasn’t until he entered the military, to get away from the streets that swallow so many youth, that he really realized that he had a talent for poetry. Still not sharing his words he got married to the mother of his unborn child. Through this union Mannie for the first time felt the blessings of unconditional love for his child. However, after being married for 9 years that union was dissolved.

Through his time in the military Mannie witnessed many atrocities such as seeing a woman breast feeding her child with breast milk that has turned to dust in Somalia and Rwanda. But those were not his only deployments. However while being deployed to Somalia; Mannie experienced first hand what it feels like have a landmine explode while driving over it. Spending 7 months in a wheel chair because walking seemed difficult especially after having reconstructive knee surgery, no longer confined to a wheel chair Mannie now walks with pride knowing that he has over come that obstacle. However, his military career came to end in October of 2001, just one month later of 9/11. This is when Mannie wondered into a book store in Killeen, TX called Under One Roof.

There Mannie experience a poetry reading for the first time. This became a turning point for him. Now with a vision Mannie performs his poetry, however that came to a stand still in 2005 when turmoil again struck. This time it was cancer. Now being cancer free for the last 4 years Mannie has become an advocate for the cancer center in Lawton, Oklahoma. This also is the day when harmony collided with agony. With no one really around helping him, Mannie finally realized that poetry is all he has to turn to. Now he performs on stages all across the United States in places such as the world famous Nuyorican Poets Café in the Lower East Side of Manhattan to the Roxy Theater in Denver, Co. With One CD released “Openly Crying” and a book called Speaking from the Heart Mannie has ventured into this world of spoken word.