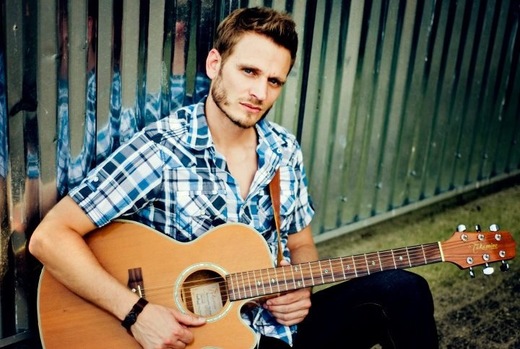 “Lyrically driven and melodically focused,” Michael Krejci is a singer-songwriter on the rise. He writes about the simplicity of the rain and the complexity of love, intricately woven together to reflect his small town Indiana upbringing. Michael’s introspective songs and raw vocals have been compared to the likes of Bruce Robison, Radney Foster and Gordon Lightfoot. As a versatile songwriter, he writes from the heart, not to satisfy a specific genre, but to satisfy those who take his music for what it is, honest and genuine.

Since relocating to Nashville in the summer of 2002, Michael has been writing vigorously and his critically acclaimed debut album, Out of the Blue (January 2007) speaks for itself. A blend of country, folk, bluegrass and roots styles, Out of the Blue is a tasteful mix of tunes that transcends genres, complementing Michael's open minded musical spirit. Such mass appeal is evident by the diverse cast of musicians chosen to contribute to the project, including guest appearances by guitar slinger Eric Heatherly (Flowers on the Wall) as well as the Infamous Stringdusters' Jeremy Garrett and Andy Hall (Sugar Hill Records), among others. Ten of the eleven tracks are original tunes and there is something for everyone on Out of the Blue . . . it is a "melodic adventure that sifts its way through the ups and downs of everyday life, a soothing and refreshing collection of songs." It is no wonder that Disc Makers, the nation's leading CD/DVD duplication company, chose the project to grace the cover of their June catalog, reaching millions of consumers and music fans alike!

Some of Michael's career highlights include opening for acoustic sensation, Lucy Kaplansky, bluegrass acts Special Consensus and Bottomline, performing at Nashville's legendary Bluebird Cafe, the prestigious Americana Folk Festival (Patty Griffin / Mindy Smith), as well as recording with an array of top musicians who play with the likes of George Strait, Lee Ann Womack, Keith Anderson, Julie Roberts, Pam Tillis and Patty Loveless. In addition to performing in Nashville, Michael plays regularly throughout the country to an ever-widening fan base. Whether you're listening to him perform solo-acoustic or with a band, you can't help but sit back, tap your foot, and get lost in the music.

What people are saying about "Out of the Blue". . .

"Vocal comparisons could easily be made to a Mac McAnally or Lyle Lovett, and although the vocal tone is not the same, there is no doubt that this guy, much like a James Taylor, is a true singer ,songwriter who has to get his feelings out." -Nancy Montgomery / Music News Nashville

Out of the Blue is “laden with 11 catchy, tuneful jams, straight-forward lyrics and a pure singer with an earnest, hopeful voice in the vein of early George Jones.” -Josh Green / The Daily Sun

“In Krejci’s sound, the imprint of diverse influences can’t help but emerge, if only a little at a time. He channels everyone from the Beatles to Merle Haggard, from John Fogerty to Waylon Jennings.” -Josh Green / The Daily Sun

"Michael Krejci's latest, "Out of the Blue," goes down like a smooth Tennessee bourbon, with just as much full flavor. His voice is captivating, his songs compelling and the solid instrumentation makes this a record that must be noticed." -Mark Wehner / Host of Americana Tonight

"Michael's songwriting takes you right out on the front porch. Out of the Blue makes it clear that we'll be hearing much more from Michael Krejci!" - Emilee Warner / DJ 88.3 WMTS "Bum Ditty"