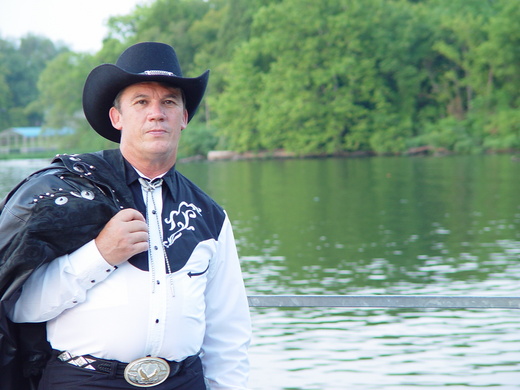 I was born July 25th, 1953 in Raleigh, North Carolina. Born into a very musical family,
I started singing at a very early age. I sang a lot in school and at family functions.
I started writing poetry very early which later developed into songwriting. At the age of 6,
I won my first talent show held at school. I started learning to play my first musical
instrument (The acoustic guitar) at the age of 15. I started learning the guitar when my
music teacher asked me if I would learn a song to play in our school talent show
My dad, being a guitar player, taught me the basic chords and with a lot of practice
I learned a song to play at the show. This was the turning point that was to shape m
life forever. After performing Simon & Garfunkel's "Scarborough Fair" I won firs
place and received my first standing ovation. Needless to say from that moment on I wa
hooked. Shortly after that I became friends with someone with as much passion for
music as I had. Within the next three years, I was to start my own country music show,
appear on several local television shows and start a career in song writing. At the age of 18 I
entered the Military and served a total of 6 years. During my years in the military, I formed
bands and performed all over North Carolina, Washington State, and all over Europe.
Upon completion of my military service I moved back to the coastal area of North Carolina
for about 5 years. I formed several bands there and performed locally. In 1982 I moved to
Florida to perform professionally as part of a country music duo. In 1996 I moved to
Nashville, Tennessee to explore and learn the music industry. I recorded my first
album (Christmas In Wonderland) in July 1997.
Also in 1997, I formed my own record label and publishing company. In 1998 I released my
first album on my label (Platinum Notes Records).I have a country gospel television sho
on WHIG-TV in Rocky Mount, NC that I'm very proud of. Today I reside in Nashville,
Tennessee following my dream.I continue to write my songs and to make albums.
My dream is to spread my music to all the people of the world in hopes of touchin
someone's life with God's most precious gift---Music.