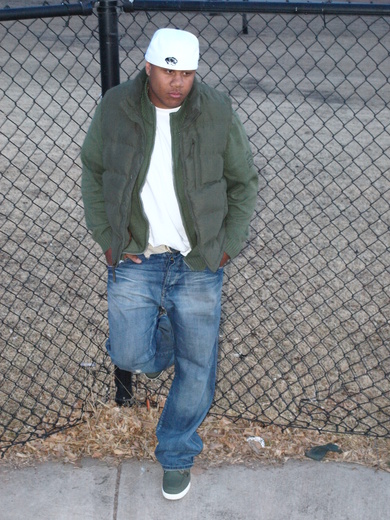 Was raised mostly by my mother but my father played his part at times.

Since I can remember I loved music.

Did shows for my family during family gathers. Singing, dancing, rapping wateva.

My first musical instrument was the flute for about a year, I felt that it wasn't right for me, but I played it, becuz thats were my teacher wanted me. and this was doing the 6th grade.

After I transfered schools closer to home I played the trumpet, drums and piano during the 7th and 8th grade for MrColeman. He believe that I was very talented, actually so talented that he had me try out for a high school jazz band.

I was the youngest there and believe that eveyone look down on me, but was surprize on how quickly I caught on.

I grad middle school and and went to Gateway High

It was a Institute of technology in st.louis, the basis of the new magnet school populating in St.Louis, Mo. in the late 90's

While attending Gateway I played in the band as well as the choir from time to time.

Sports wasn't the first on my mind but I played basketball, and football to keep my masculataty together.

I became cocky and challenge anyone to be better than me. I held the title for the highest note for the longest time.

My cockiest was well noted and everyone respected me as to be the best there.

School was ok, but band was all that I wanted to do.

My band teacher Mr. Hill, Steven tried to get me scholarships to BYU, Florida U, and Georgia tech. But my grades wasn't up to pare.

So I graduated highschool in 1999, along with my peers but barely.

After highschool I was a phase that I knew nothing about. Adulthood

So money was my major concern, I mean I had jobs during highschool. But that was for clothes and a car.

Now I was on my own tryin to find out how does this all work.

So after 10 months of decision making I finally came up with something. Join the Army

At the age of 19 I join the United States Army in hopes to make a future for myself.

I choose a job that would be good for my future. Communications.

After my first year in I began to understand one thing. Is that I felt lost. I felt that I was without something

Music wasn't on my mind, but it took some soldier to wake me up.

I listen but felt that all his beats had a certain same swag to it. Like it was all at the same tempo or had the same instruments I didn't like it and was up front with him.

After listening to his stuff, I decide to create my own, so I went out and bought a Yamaha QY100

That was my baby, I created the beat for Dats alot of doe doe on it, and a lot more.

I still have that beat machine still today.

While deployed to Iraq in 2004 I played with it every now and again. Stocking up on beats.

When I came back in 2005 I layed down tracks with friends of mine that deployed with me.

We tracked about 6 songs together and this was my intro to rapping on tracks.

I left Washington with my pregnant wife to end up in germany,

There I linked up with more talented music lovers and produce music for them as well.

I found myself more alive when I was creating music, producing and writing.

Then I was deployed once again to the Horn of Africa.

After the first show others haed that they missed it and ask me to do it again.

I performed 4 shows for them making that club the one to go to club.

My popularty began to rise, becuz alot of these soldiers, airmen, and sailors were from different parts of the world or country. And told others about me, but because I wasn't really pushing my music most forgot about me.

After another year I returned to the states, COlorado Springs, Colorado in the supposed spring of 08'

After deploying again in summer 08' I decide to go full steam with music.

I produce my first main track Dats alot of doe doe while deployed and several others but that was my ticket,

So many people acknowledge my music as the new hotness and wanted me to do more.

After returning home to Colorado Springs, COlorado I recruited JahQueen Martinez as my promoter and also Kelci Hunter to be my manager. Kelci was kinda new at it, but he gave me a feeling that he would do all he could.

I peformed 4 shows under his mangement and saw no new progress so I began to not deal with him anymore, plus he was having family issues.

I opened up for Spice 1, Tech 9, Black P, and have create a good buzz for myself, through-out the colorado community

and also st.louis, and the rest of the country.

I have my song playing at 3 current radio station and doing my best to get more, by tracking down certain station and proving to them that my music is the next best thing.

My intentions is to be famous, creating a image that girls would love to be with.

And men would want to hate or love.

My willingness to want to become this next bg thing is at a million. Money is not my intentions,

My life and music being heard and adored is my intent through-out the world.

If you feel there is more to add let me know