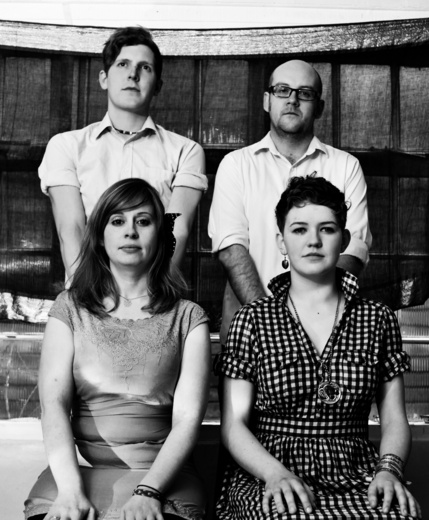 Comprised of two girls and two boys from Northampton, My First Tooth deliver a punch to the gut and a kiss on the cheek with their brand of indie-folk/alt-country . A string of singles and debut album 'Territories' (released recently on Alcopop! Records) have garnered considerable praise from critics, including The Word who said "A full-on blast of raucous folk-pop that’s all hoedown and no slowdown.", and The Fly who called them "...seriously impressive...". Near constant touring has seen them hone their frenzied, harmony-laden, instrument-swapping live appearances into a barnstorming show that NME described as "unmissable". They sing about ships, wild animals, friendships and mountains. They sing together loudly. They sing together quietly. They play like their lives depend on it. They just might.

"A full-on blast of raucous folk-pop that’s all hoedown and no slowdown, Orchards was one of our favourite singles of the summer" - The Word

"We're not going to do them the disservice of saying they're going to be 'this year's Something and Sons' because they deserve better than that. What we will say is that with the right backing they will go very, very far." – Artrocker

"...a seriously impressive showing." - The Fly

"...a folk-pop classic in the vein of John P Strohm or Fingers Cut Megamachine, brimming with heart and character – and it points to a great future for Northampton’s finest singer-songwriter. 5/5" - Big Cheese

“Exuding bags of energy, they brought some light-hearted folk-rock into the mix, complete with violins and harmonicas. As a band they were incredibly likeable, and carried out the fast-paced instrument swapping seamlessly. It was all I could do to stop myself dancing and instigating an impromptu hoedown.” – NoizeMakesEnemies, SWN Festival 2010

“…robust and joyous boy-girl county-folk hoedowns such as Orchards grabbed the audience buy the balls and led them to the drunken village barn dance for a romp in the hay.” – breakingmorewaves, ITC 2010