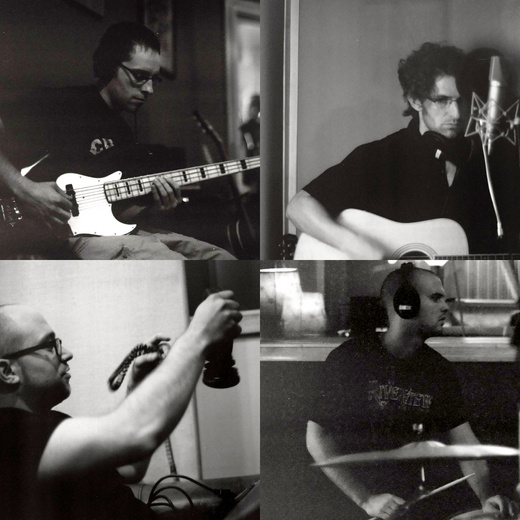 The story of Paper Arrows:

Across the winters of 2007, Joe Goodkin, Jay Marino, and Darren Garvey pieced together a group of recordings in a Chicago attic overlooking I-90, working around ten of Goodkin's orphaned acoustic demos.  Quiet songs like Again and Again combine fingerpicked guitars with the sounds of highway traffic and trains to create a sonic bed for whispered lyrics fraught with pain and regret.  Hope flickers on the ebullient Motown-influenced Turn, but by the album's closer, When You Left, the loss is fully realized and Paper Arrows' 2008 debut Look Alive is complete.

Following favorable press on Look Alive (the Chicago Tribune's Redeye asked "Did rock superstars Radiohead steal local band Paper Arrows' idea?"), the band returned to the studio to begin what would become its second full-length, 2009's Things We Would Rather Lose.  In contrast to the silent spaces of Look Alive, Things We Would Rather Lose is packed with noisy guitars, distorted organs, layered vocals, a horn section, and a stylistic variety that evokes the nausea of recovery. On select tracks, additional musicians joined the core three, including the Cosmic Unity horns, pianist Drew Scalercio and bassist Anthony Burton.  The central question of the lead track More ("Can you leave the ghost behind?") is addressed in song after song, building to the climactic, chaotic final statement of Explosions Below ("Turning the page on the last piece of love").

Things We Rather Lose found a place on the airwaves (substantial college radio play) and the small screen (featured on MTV programming) and in the summer of 2010, Paper Arrows (now consisting of Goodkin, Marino, Garvey and Scalercio) spent three days at I.V. Lab Studios in Chicago tracking its third full-length album in three years, In the Morning.  Ten tunes, one goal: resolve the cycle of loss and recovery with a set of songs aboutredemption.  Recorded largely live, In the Morning is the band's most cohesive and upbeat offering yet.  The defiant chorus of Smoke and Ash ("no it's not okay if you go and go fading away into smoke and ash from fires we'll always regret") gives way to the sweet promise of Dry, the acceptance of Still Got You, and finally the closing piano ballad Near, a lullaby that serves as a quiet conclusion to the three album arc.

In the Morning was released in early 2011 after the band completed a prestigious month-long residency at the Chicago rock club Schubas, and has garnered radio play, television licensing, and positive press:  The Chicago Tribune named Paper Arrows as one of the "11 Chicago Bands to Watch in 2011."

So what happens after the story is resolved?  Paper Arrows is currently recording new material which will be released in 2012 as part of their "11 for 12" project: 11 songs released one a month, January through November, each with an accompanying video.