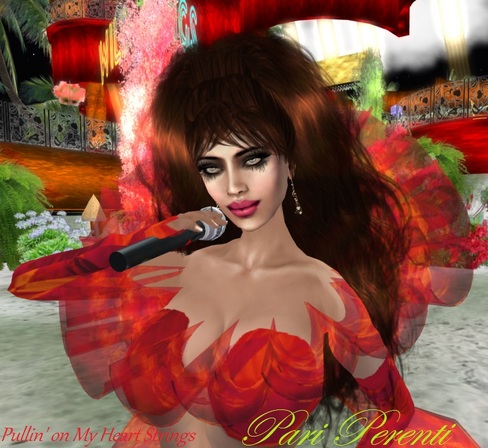 Pari Perenti is a gorgeous singer/fashion designer avatar in 3-D online inworlds called SecondLife.com and also inWorldz.com where she sings and dj's at her Wild Thangs club which is located at her sim island called Wild Spirit, and showcases her fashions and shapes in both worlds.

Pari Perenti is the creation of Marilyn Hill who is the actual singer/songwriter/voice over artist. She uses her avatar for her cover art and videos she creates as well as her pen/stage name. Marilyn was born in Florida, and now resides in Tennessee in her father's hometown. She has been singing for most of her life, as long as she ever knew about music and her love for it! She has a Rock, Country, and Gospel background.

She comes from a very musical family in which her mother and two aunts were in a gospel singing group with their preacher father called ’The Dixie Melody’ in Orlando, Florida at their very early ages, and have been singing ever since, too. The reunions now are so fabulous!

Her mother's cousin, Lionel Delmore, was the co-writer with John Anderson on many songs including the very famous Song called "Swinging" which became the #1 hit in 1983, and Lionel's father was one of the famous brothers of the 1930s country duo called 'The Delmore Brothers' in Huntsville, Alabama, where Marilyn's mother's family originated. She and her mother has written many songs, too.

In the 1980s, Marilyn was also a model/actress and one of the movies she had gotten into had starred Johnny Cash and June Carter. Marilyn had the honor of dancing with Johnny Cash on that movie set, and when she did, she felt she had touched greatness!

Marilyn has had voice, violin, clarinet, and guitar lessons early in her life. Her passion is music and singing, and anyone can feel that by the loving atmosphere she creates when she sings songs that she loves to sing that make her feel wonderful inside,and her voice is sexy, sweet, and powerful.

Marilyn and Pari are one in the same, and now has many songs as Pari Perenti in an album called "Pullin' on My Heart Strings" at iTunes, Amazon, and many other places, also in internet & cd jukeboxes at bars, restaurants, and with dj's around the world. She made music videos out of some of her songs and put them on Youtube and other sites as well.

She creates songs via internet with her musician friends from around the world to the point that she has become multi-genre. Many of the musicians she has worked with in creating wonderful songs are Arian Hagen from Germany on "From A Distance", "Swimming in the Sea of Love", "Did You Ever Think","I Feel Just Like a Million Dollars" "Why Have I Done This", & "Let's Go Fly"; Hippie Rockso & Weapon from the USA on "Get Cha Mind Right"; Bryan Dorland from Canada on "Unforgiven Soul"; James Joyner from the USA on "Solid Grounds (All The Time)" & "I Keep Dreamin'"; Ravi Shankar Narayanan from India on "Life in Blues"; Sean Knight from the England on "Christmas in Heaven" & "Country Kinda Christmas with Santa"; Jericho Dani on "Time"; Mike Reilly from England on "Gone to the Pecos"; Hans Tiger Smits from Holland on "Anything For You"; and the guys who collaborated on "Sweet Talkin' Cowboy" were Dale Crowley from the USA on piano and strings; Marcus Bierbaum from the US on guitar; Daniele Silvestri from Italy on drums; and James Joyner from the US helped to coordinate that collaboration as well. Her very own song creation is "Sexy Wild Thangs" in which she uses as her theme song for her Wild Thangs club in inWorldz.com

Marilyn is happily married to her British turned American husband, Michael, and she loves her family very much.