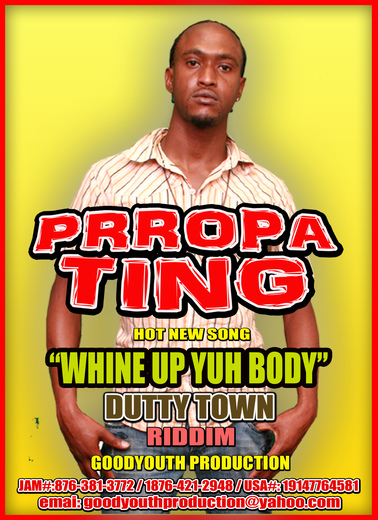 Prropa Ting, A.K.A “Askell” A.K.A “Prropa” was born Iyanie Henry on December 4, 1986, in Jubilee Hospital Kingston Jamaica. The name Askell came about at the age of twelve years old. One night while hanging with the older men on the corner, suddenly a lot of Cops came upon them. One of the guys toss a hand gun to the ground, Askell went and pick up the gun and put it in side his under wear with only seconds to spear, while only wearing a boxers. Everyone was search but the Cops told Askell, "Go one side youth." While they frisked the older men. After that day he was known as Askell, simply because the gun at the time was a German made handgun, by the name of "Askell 45." Prropa Ting and his childhood friend Damion had aspirations of becoming an asset in the music industry. This all started with a sound system called Brute Force, which is managed by Damions step farther Mikey. To this day the sound of “Brute Force” is still heard all over Jamaica. Prropa Ting would watch Mikey as he spun records and made selections on the turntables. Prropa Ting felt the Love, Mikey had for what he did. Prropa Ting started to DJ at the tender age of five years old. When Mikey would allow him to touch the Microphone. Holding the microphone was something that came natural to him. Whenever he was on the Microphone everyone in the district knew it was Prropa Ting because of his distinguished lyrics. He was the first child of his parents to attend a Technical school. Shortly there after he moved to Spanish town Browick, Central Kingston where he furthered his education. He attends K-T Kingston Technical School, however a short time there after he was kicked out of K-T. Prropa Ting papers for school wasn’t up to date, so he was removed from the school. He remembered one Teacher tried to convince the school so he would stay but to no avail. Prropa Ting started attending various studios uptown Cross Roads, in order to keep out of trouble. Everyone he encountered said he has a distinctive and unique voice. He was reminiscing of artist like Buju Banton, Turofabualus, Assassin, Bounty killer, Shaggy, Busy Signal, Baby Sham and few others. Damion Richardson the cousin of Paul Brown Prropa Ting’s manager took an interest in the promotion and career of Prropa Ting. Paul Brown watched Prropa Ting and Damion as they matured musically . He said he always knew Prropa Ting had the talent and needed to go forward in the music industry. Every time Prropa Ting and Damion would battle or clash he always felt that Prropa Ting would be the victor. No disrespect to Damion he was nice but Prropa Ting was ready. They both were winners to Mr. Brown. They would ask Mr. Brown all the time, which was the better one, knowing that his answer would remain the same. “ You both are winners in my eyes” They hoped that one day he would change his answer and just pick a winner. You can hear lyrics like, “Things & time”, “Gal u nuh regular”, “Nutten nuh wrong” and many others. Prropa Ting’s lyrics can be heard all over the Air Waves, in the United States, Right Vibes 106.9 FM, Real Deal, 94.3 FM Linkage Radio 105.1 FM. In Jamaica Hitz 102 FM, Zip103 FM and Radio 87.6 FM. ..Prropa Ting will be working with artists, such as Tony Curtis, Assassin and Sarani and more in the near future. He has work with many Producers such as, Good Youth, and Fat Eye’s. E-mail Catpaul33@yahoo.com 914-776-4581 U.S