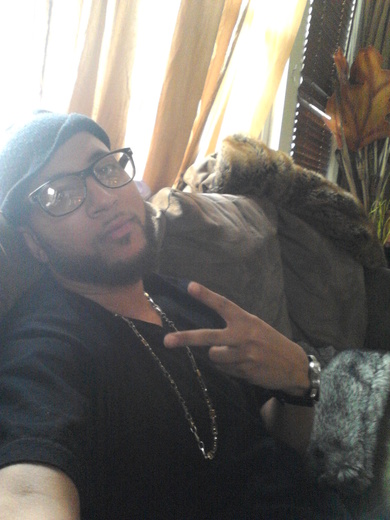 PTADA is not just another rapper, he is an artist. His love for hip-hop is evident in every line he speaks. It is definitely an art for PTADA who has continued to create music for over 15 years without landing a major record deal. Many rappers would have given up, but PTADA continues to give his all. He does not make music for the love of money; he makes music for the passion and love for the music. A song by PTADA is a reflection of his life, his personality, and his ambitions. His views of life are bonded with the instruments. To PTADA'S music is not a gimmick, it is a way of life.
"PTADA" is the name he’s been called since he emerged on the streets many years ago. His obvious ties to the street life growing up were the reason he’s always used music as a positive outlet. His rhymes are compelling and demand the attention of all! PTADA began his passion for music on the slummy streets of CONNECTICUT. His lyrics reflect the harshness of being raised in the city that has often been referred to as the MENTAL(MIDDLETOWN). He is a lyrical stick up kid by nature, and listening to him flow excites the same feelings you may experience watching the NASCAR Championship. When he is at full force you can feel your adrenaline pumping anticipating his next line. He is confident and driven by his powerful vocals. PTADA has always been known for rhymes filled with passion and realness that will bring you back to the streets, back to the club, or back to reality. His music tells his experience and demands respect from all listeners.
The musical path of PTADA has been inspired by such legends as Jay-z and NAS; which gives explanation to why his music is so real to life, in depth, and descriptive. His vocal styles are similar to Young Buck,EMINEM and T.I. This is no surprise considering all the ups and downs in his life.
PTADA has been on the underground scene for 12 years performing at various local venues in the Tri- State area. Although the talent is evident, numerous set backs have prevented PTADA from excelling to his full potential. PTADA will release song after song and album after album until he makes the impact he believes he deserves. He is an unsigned independent artist currently seeking to seal a contract with an established label to get his music in circulation and advance his career to the next level. The C.T. artist known as PTADA has been rapping for over 15 years, and like a rare vintage wine, he gets even better with age.