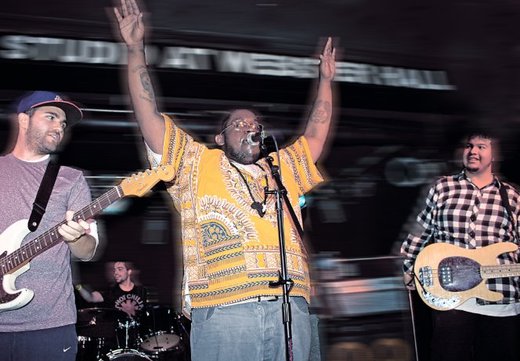 PunchFunkLove is 4 piece Hip-Hop/Rock band from Queens, NY; originally formed in the Summer of 2009. The band have released several demos and went on tour twice in the months leading up to the release of MegaMouth in September 2011, their first EP on Darkside Records. MegaMouth was praised by critics and even included by CBS Street Date on their list of "Best Albums of 2011".

PFL's two early tours spanned 12 states and created a significant underground buzz about their energetic live show that never fails to bring the mind-blowing energy that hasn't been seen since the early days of Rage Against the Machine; with music that makes you instantly break out and dance when listening to bands like Sublime or The Red Hot Chili Peppers. Complimenting this is PFL's incredible lyrical side that has the ability to give you the chills and then a moment later make you feel like you're at the best party in NYC; often being dubbed "the next generations Nas or MF Doom.

They have also been fortunate enough to have opened up for many big names in the industry such as Havoc of the infamous Mobb Deep, Everlast (House of Pain), Saigon, Bizzare of D12, Badfish, Happybodyslowbrain (ex-Taking Back Sunday), the legendary Immortal Technique, Joe Budden, Diabolic, and many more.

After listening to their debut EP and seeing them in full force live, PFL will make you feel like real hip-hop and true rock music are still very much alive, and well
Lookout for the bands next EP "It Is What It Is", coming in March 201

Booking & all other professional inquiries - punchfunklove@gmail.com