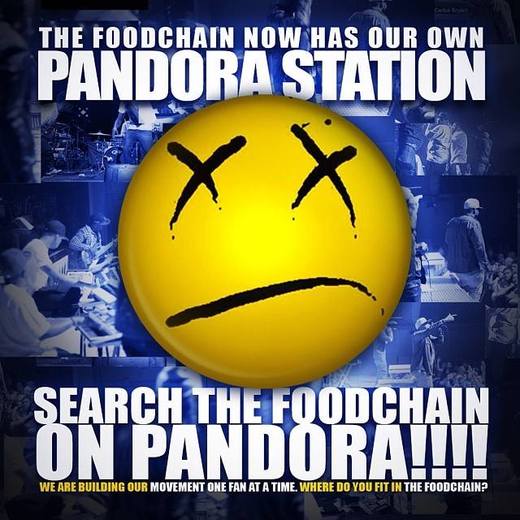 We are building our movement ONE fan at a time. Where do YOU fit in the Foodchain?

The Foodchain is a Colorado based hip-hop group that has been making
their mark on the independent scene since 2010. When DJ Statik
Selektah heard The Foodchain’s freshman ‘Corpses’ album, he was so
impressed by the music, he inquired about its label home. After a trip
to NYC that included rocking with Talib Kweli, 1982, Artifacts, &
more, the deal was signed and ‘Corpses’ was released on Showoff
Records.

The blogosphere picked up on the ‘Corpses’ project and the album
received rave reviews from fans and industry tastemakers around the
world. With a powerful, real and true to heart sound in a musical
landscape oversaturated with make-believe rappers and one hit wonder
seekers, ‘Corpses’ became a breath of fresh air and the industry took
notice. The alum featured Talib Kweli, Pooh of Little Brother and
Hall of Justice.

In the fall of 2011 they released the album ‘Brunch’ for free and once
again the fans and the industry answered with praises from the most
respected bloggers to cosigns from DJ Premier, Big Jon Platte, and
Paul Rosenberg of Shady Records who added the first single ‘Dear
Industry’ into rotation on Sirius/XM Shade45. After seeing the unique
grassroots approach The Foodchain embodies, Paul Rosenberg graciously
asked them to perform at the Shady Records 2.0 Showcase at the 2012
SXSW festival in Austin March 16, alongside 50 Cent, Yelawolf,
Slaughterhouse, Big K.R.I.T., Schoolboy Q, Action Bronson, Don Trip
and STS.

Much like life’s circle will live on until time’s end… “The Foodchain”
proudly brandishes their love of hip hop as more than a form of
artistic expression or source of income… They see it as a chance to
move the masses.