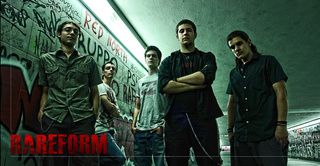 It was the year 2007 when some childhood friends with the same passion for music wanted to create a band. Inspired from the melodic death metal sound Portrait of Death took flesh and bones and began writing their first material.

From these friends, only one had a dream to evolve the band and make a professional step; only one had the passion to continue. Mastermind Viper, who was guitarist and vocalist at the time being wanted to drive P.O.D. to the next level in every section, after some line up changes, few local live acts, many hours practicing and searching their identity sound.

In the year 2009, with a steady line up, the band recorded their first 4 track EP with a new solid sound and a way of writing more aggressive guitar riffs, breath-taking breakdowns, melodic choruses, blast drumming and some powerful screams and brutal vocals.

2010 the band decided that, after changing their sound, it was the right time to change name before they began to perform live. Rareform is the name that will mark their new extreme death metal/metalcore sound. Now this 5 men who represent R.F are ready to support their latest work with live performances.