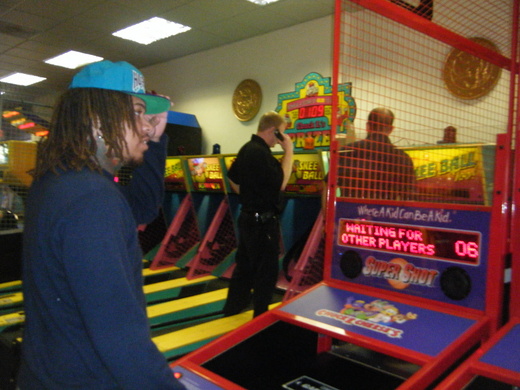 I was born and raised in Long Island, NY. It wasn't very easy when I was young, it was always me, my mom, and my brother and sister. My mom went from job to job trying to support all of us. We went from house to house, I switched schools at least 10 times. Never had friends that really stuck because we were always moving around. I lived out of boxes and suitcases for a long time. So it basically was just me and my music. I knew my whole life that I was destined for something more than the burbs in Long Island, pushing carts in some parking lot. Then I met my wife and we were off. We flew to Sacramento, California and wound up staying in this apartment with sheets for walls with 5 other people, two of which were Philipino and one Fijian. Basically it was a tight fit and weird beyond belief. I decided that it wasn't for us and diped again. We flew to Arizona and wound up in a town called Tortilla Flat, a population of 6 town and yep you guessed right, I was the only "Negro" in town. At first we lived in a dome tent in the middle of the Tonto National Forest, later we got an apartment above the store living with a 55 year old woman and a crazy 20 year old girl and her three legged dog. I wound up scooping ice cream with a lady who had literally two teeth and a spanish guy named Moises (no English between the two of them). My girl and I wound up saving up a little money and took it on the road. We lived in like 7 states a couple of days if not a week or two at a time. By the time we ran out of money we ended up in Drummond, Wisconsin. I'll give you a little info about Drummond, it is a population of like 100 town and the nearest major town, which included a Wal-Mart was about 40 miles away. My sister in law was running a camp ground up there and we decided to stay. Once again we were living in the middle of a national forest in a tent. We made together all of $750 a month. Which was barely enough to feed us and the dog, forget gas to get into town. However it was good, I got more than enough time everyday to write. Me and my wife Casey turned our 92 astro van into my own personal "studio". I began recording my whole mixtape (Agnus P. Hartnabrig The Mixtape) on a $9 microphone from Wal-Mart and our old laptop. We made the best of it. We couldn't hit any lower and I knew with all my heart I could do this. Thats it. Legendary..