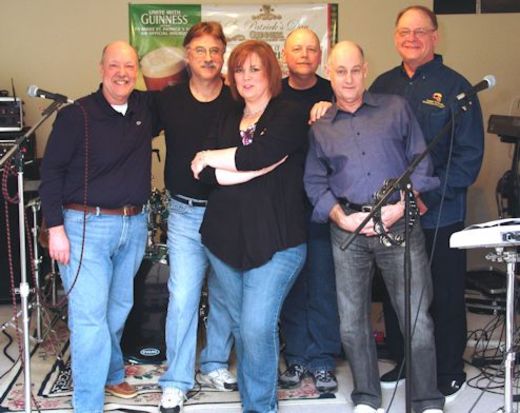 OTR ("Off The Record") is fairly new to the DC-Maryland-Virginia scene, having been formed in 2011 from two long-established, powerhouse cover bands -- Point Blank, and Mixed Company. The band features two musicians who studied at the Berklee School of Music (Fred Muller, the keyboardist, and Dick Cole, the drummer). The band is striving to differentiate itself from the numerous other cover bands in the region.

"We want to be the band that performs music you never hear from other cover bands," said Fred Muller. "We want to play music that is technically challenging for us as musicians that will get a huge crowd reaction because it is so rarely played by cover bands." The group is working to add tunes by Yes, Toto, and Steely Dan to its repertoire.

The band's members are mostly in their late '50s and early 60s, except for Kat Brais, the band's new vocalist. She will quickly remind her band mates that she's in her late 40s. Kat came to OTR after a number of years in musical theater. "I always wanted to sing in a band," Kat said. She has a great voice and is most at home singing Adele, Joplin, Raitt, Ethridge, Crow, and Benatar, among others. OTR is also constantly adding new tunes to its repertoire to showcase Kat's vocal abilities.

Veteran regional musicians Frank Troccoli and Jesse Farthing performing for the last 20 years with Point Blank. Farthing, a retired Verizon communications executive, founded the band. Troccoli, also a former communications executive, joined Point Blank after moving to Northern Virginia from New York in the early '90s. Now Troccoli is the owner of JBE, a manufacturer of guitar pickups used by such luminary rockers as Joe Perry of Aerosmith, Bruce Springsteen, and Nils Lofgren.

Dick Cole, the drummer, is also a Point Blank veteran. Cole played with three other Northern Virginia bands before connecting with Point Blank. He's been performing with Farthing and Troccoli since 2006. When not making music, riding his motorcycles, or making custom drum kits, Cole is an employee of the Department of Defense, where he works in the field of public relations.

Also a Point Blank veteran is computer executive Fred Muller, who plays keyboards with OTR. Muller was working with Point Blank for several months to replace the band's long-time keyboardist and vocalist who was leaving the Northern Virginia area to retire in Florida. He was with the band less than a year when two other members of the band decided to take a break from gigging and the band fell apart. It was Troccoli, Muller, and Cole who ultimately pulled OTR out of the ashes of Point Blank. Muller is also using his knowledge of computers to help the band make use of midi technology in the music they're performing.

Bassist David Norod is also a Point Blank veteran of sorts. Norod substituted with the band for a lengthy period when an injury sidelined the band's bassist. He had been playing with the area band Mixed Company for more than 20 years and wanted to play some different and more challenging music. Both a bassist and a drummer, Norod and Cole, who also plays bass, work well together in providing OTR with its "groove."