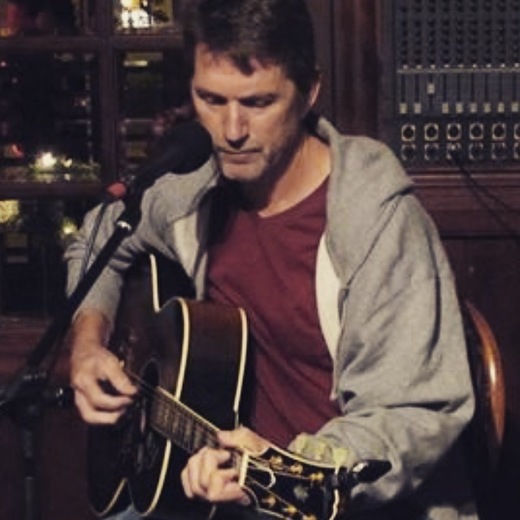 I have always had a love for music. I started  playing the guitar when I was young and did what every boy does joined a band and had a lot of fun. At the age of 17 I left home and moved to Florida  to pursue my music career. It did not work out as planed.I just could find no one that I could collaborate with that had the same direction I was taking my music. I needed to make some money so for a while I channelled my artistic expression by designing and rebuilding homes which I felt had some Architectural significance. This gave me some financial support and I took some time in my life to work on charter boats to learn how to sail. Some times I was able to play songs that I had written for the guests. After sailing I pursued hang gliding and learned to fly. That led to many great journeys and I had many adventures. I came back to Florida and met some good guys that were going to the U of M school of music. They liked what I was playing and we formed a band and I was able to do my first recording. One of my songs “About Love” received an honorable mention from the Billboard Song writing competition. They were much more trained than I was and it was a good effort but we eventually went in different directions. I did learn a lot though and I am forever grateful to them for helping me on my journey. My life was about to be changed more that I could imagine. My father would pass away from Alzheimer’s Disease, and soon after my eldest son was diagnosed with cancer. My mission was to find a cure for him. It would not come though and he left us after 8 years of trying everything we could. Bailey also loved music and in times of remission he was able to perform with some very good artists. My fondest memory was the time he got to perform with Steven Tyler of Areo Smith at a cancer benefit in the florida keys. I am forever grateful to him for letting him have this day. It is hard to understand and I don’t even know why but during this whole time I could not pick up and play or think of my own music. The burden in my heart kept me frozen feeling helpless many times. I never got to perform with my son. This will always give me sorrow but I was just unable to play. The Miami Herald did a full page article about him and his journey as he did not make his last performance. I was fortunate to be blessed with a loving family and with their help and Master Tsai who taught me meditation I was able to start my healing. I was also fortunate to have a beautiful daughter Olivia. She is every color in the rainbow, and my youngest son Ford is full of light and giving. My daughter Olivia asked me one day why I do not play my guitar any more. I told her I don’t know why as it used to give me great pleasure and I enjoyed it very much. She asked me to please write her a song that I could sing when she was going to sleep. I wrote the song OM Lullaby. She asked me to play it every night, and I did. A funny thing started to happen. After I would get done playing I would feel much better and I would sit and keep playing for a while longer. All of a sudden many songs that I had never finished started to come to me very quickly. I started to have the heart, mind, instrument connection that I had not felt in a very long time. I felt like my playing was lacking though so I sought out a teacher. I found a great teacher named Jeff who was a grad from Berklee . I went to him and asked him to teach me some Jazz cords and he asked me to play him what I have written. I played a few songs for him. He said he would be glad to tech me the things I wanted to know but that I was a writer and that is where I should apply my self. He told me once that all songs come from the universe and it is an honor when we are chosen to express them. Good or bad they chose us. I asked my wife Vanessa her thoughts and she encouraged me to follow this long sought after dream. So I kept writing and composing and decided to contact a friend of mine Karl Richardson as I knew that he had worked in the recording industry. I asked him to come over and have a listen and tell me what he thought. I knew he would tell me the truth. He told me my voice was not there yet but that my songs were very good and that I should keep working with them. It was after this that I found out what a great history Karl had in the industry. This is when I searched for recording company’s and found a company that would let me start to put together some music as I had no band at the moment. I also figured out how to use Garage Band a little. I also found Ourstage and sent a song to Peter Rafelson. We got together and recorded some songs and they turned out great. Now I just gotta keep playin and writing and let what will happen start to happen. Rob Kayes