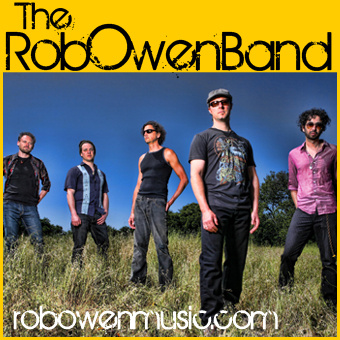 Born in the Silicon Valley, Rob Owen moved to the coast as a teenager to get away from the rat race. He found a place inSanta Cruz,CA where he could sit quietly, listen to the waves and write music. He hasn’t moved since.

Rob’s earliest influences derive from listening to his grandfather sing and play on an old beat up white, upright piano. Rob believes that when he reaches down deep during a performance he is singing with his grandfather’s soulful, raspy, baritone voice. “Although I was very young when I knew my grandpa “Bud,” he is the one I really resonate with. He was a successful singer, a drummer, a fisherman, and always put his family first.” Rob’s other vocal influences can be heard in the likes of Ray Lamontagne, Peter Gabriel, Youssou N’ Dour and Eddie Vedder. The theme in all of his influences, and probably the most notable trait in his own voice…? Passion.

His inspiration comes from not only the energy he gets from listening intently to the previously mentioned artists, but from the love he finds in his family and the simple wonder of being alive. “I’ve been reminded of my own mortality more than once now. The first time, when I was 8 or so, I watched my grandmother pass on right in front of me. The second time I was 17 and barely made it out of the hospital alive after a grueling auto accident. As I grew older I came to realize that these events were a big wake up call for me to learn from. Coming to this realization, then meeting my wife and having a family, brought me to a place of total wonder about what it really means to be alive. When you stop and think about it, it’s really just incomprehensible how wonderful things really are at their core.”

Rob has taken his influences and inspirations and created music over the past 15 years that has been recognized by national magazines, newspapers, independent record labels, radio and television. Some of his more recent accomplishments include: Compositions aired on MTV’s Real World, #1 Song Critique in Music Connection Magazine’s June 2010 issue, #1 Music Critique of 2010 in Music Connection Magazine’s December issue, Nominated Best Adult Alternative Artist by ISSA Songwriters Association, Top Five Vocalist in Singer Universe’s Best Vocalist of the Month Competition, Featured on Yamaha’s Cubase DVD and has had Exceptional reviews in The Santa Cruz Sentinel and The San Francisco Voice.

“His voice is rugged but soothing, with great range and emotive qualities. His songs are laden with tell-tale signs of a well-trained artist from his melodic transitions to his rich poetic lyrics”

“Rob Owen has a very unique and relaxing sound. His songs tell a story and have a distinct feel. Rob’s voice is truly amazing—and unforgettable”

“(Rob Owen’s songs) are uplifting, almost poppy, and they are filled with gems of lyrical insight…”

"When I need to clear my head, I listen to Rob."

“Music for any mood...I found myself leaning back, and doing nothing but listening to the lyrics and music as I prepared for show”