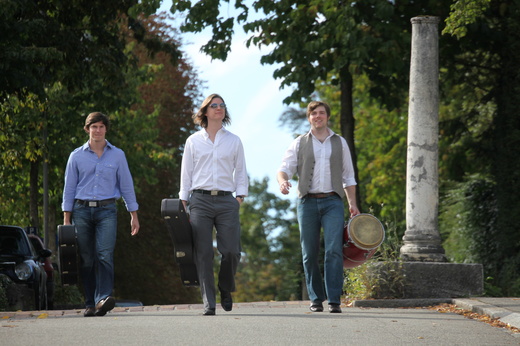 "...energetic yet soothing, intricate yet accessable. While the Latin and jazz influences are obvious, its appeal is broader.”--Mobile Press Register

" Even as an opening act for headliners, Roman Street has the audience so enthralled; encores are demanded of them consistently."--Catt Sirten, host of Radio Avalon, Catt’s Sunday Jazz Brunch and music connoisseur of 25 years

In the year 2000, beginner guitarists Noah and Josh Thompson met guitar vituosos, TONIC STRINGS, from Europe. The early exposure to world music styles never left the boys...in fact, it only became more prominant. After a few trans-atlantic guitar lessons and lots of practice, Noah and Josh went to Europe for a sit in with tonic strings in concert. This 'dive-in' approach to improvisational performance, coupled with the life changing experience of travel, piqued the creativity of Noah and Josh such that they began to compose thier own tunes. Gaining in popularity by the week, they decided to turn the hobby into a job----joining forces with good friend Dan Brett in 2006 to form Roman Street.
What started as a friendly jam session has developed into the Billboard/iTunes charting band who many have dubbed 'the next generation' of Jazz Fusion. Roman Street is an internationally trained instrumental band specializing in improvisational fusion of Classical, Gypsy and Contemporary... Jazz, Latin, Funk, and Nuevo Flamenco. A departure from the over-produced music that is out there today, they keep it simple—the beautifully organic sound of acoustic instruments played by talented people who love what they are doing. Roman Street has opened concerts for international sensations George Benson, Boney James, The Rippingtons, Earl Klugh, Jesse Cook, and the Preservation Hall Jazz Band (New Orleans, LA.). Now a regular at Jazz Fests and annual trip to Europe, Roman Street has expanded its sound to include additional musicians and continues to grow. Their music has found its way to over 20 countries around the world.
Thanks for your interest,
Roman Street
Noah, Josh, & Dan