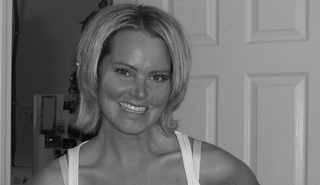 Rosi was born in Armstrong BC. After graduating in 2000 Rosi decided to move to Vancouver to pursue her music career. While in Vancouver, she would perform at the local bars and Coffee houses around the city and would start writing the songs that have been recorded for her debut album, Through These Eyes.

In the summer of 2002 Rosi headed up north to the Yukon to record her first demo CD in Whitehorse at Rainbow Records.

In the summer of 2004 Rosi again made her way to the Yukon where her brother's company Northern Lights Productions held a Miss Yukon Pagent and Rosi was the headliner performer at the Pageant.

Rosi decided to come back to her home town in 2005 and started working with another local band called Meticulous. Rosi's debut album Through These Eyes was released later that year. A variety of folk/rock/country and pop, this diverse album shows what this young chicky is about.

After the release of Through These Eyes, Rosi travelled to Montreal, Canada to promote her new Album where she played coffee shops, pubs and restaurants. After returning home to BC Rosi decided to travel to Northern Australia where she would start writing for her second album.

Rosi is currently writing new material for the album and will be performing locally in the spring and summer.