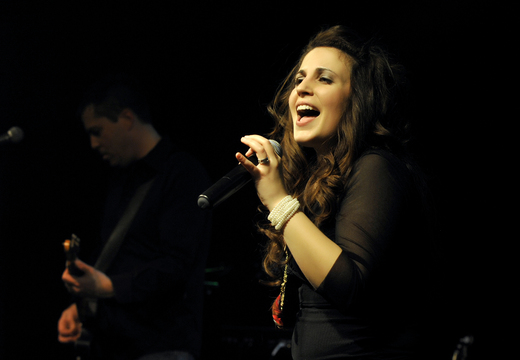 2011 Winner of Country Artist of The Year at the Indie Music Awards and best known for her powerful voice and show-stopping performances, Canadian born and raised, McClurg is a bursting combination of true talent and a little mystery that keeps you coming back for more. Raised on Dylan, Lightfoot, and top 40 radio; Sarah was gifted with an undeniable love for music even before she could even speak. “There was always music in our house…I knew from an early age I wanted to be a singer, an entertainer,” says McClurg. “I feel like every time I open my mouth and sing it’s an opportunity to be heard, to connect with people.” McClurg’s steely determination to sing coupled with her dynamic personality and love of the stage has allowed her to sing, write, perform and compete throughout Canada and the United States. 2009 brought McClurg to Nashville, Tennessee and producer to meet Danny White of renowned 16 Ton Studios on famed Music-Row. After collaborating on what was to be just a “single,” the two decided a full-album was the only way to go and so ensued “Tennessee Rain”, an album of heartfelt, sincere country songs by a seasoned and confident artist. Notable tracks like “Neverland”, the all-too-human story of love and deceit where there’s no fairytale happy ending. “…I thought he loved me but now he’s shown his hand…no plan to ever come back again”, belts McClurg in that unique “all-in”, raw style of hers. The title track “Tennessee Rain” an up-tempo, vocally driven tune about lovers against all odds “washing away the pain tonight in the Tennessee rain” has you singing along to the hook before the song is even over. “Recording my album in Nashville has been such an incredible experience. There’s just that special something about Nashville – something that hits you close to your heart. These are truly some of the nicest people I’ve ever met and the level of talent here is staggering! “ Featuring stellar performances from some of Nashville's finest pickers and players, McClurg’s debut album is set to redefine contemporary country music. Welcome the new Nashville sound with great lyrics, beautiful melodies and plenty of good old country soul. McClurg has managed to keep it plain and simple but innovative and exciting… Singer, songwriter, girl next door --- With songs are playing on UK radio -Sarah McClurg is gathering steam like a runaway train poised to take it straight to the top. Check out www.sarahmcclurg.com for info on Sarah's UK tour in February 2011.