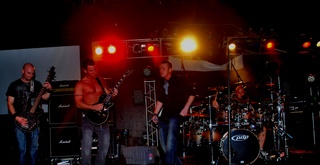 About Shadows In Red

Shadows in Red is a five piece alternative rock band formed out of Toledo, OH.. Since their formation in early 2008 they have played over 100 live shows collectively. The group started as a cover band but after performing their first original song “Addiction” at a venue and receiving fan feedback inspiring them to focus primarily on writing their own material. Since then the band has transitioned into their own distinctive sound and have been working on writing and recording all there original music. The band consists of Taylor Barker (lead vocals), Joe Mottmiller (bass/backup vocals), Brad Smith (lead guitar), Ted Keil (drums), and Eric Minkowski (guitar).

Taylor Barker (lead vocals): Taylor began singing in grade school when he joined the choir and continued throughout high school. Like most school children Barker had a short lived experience playing the recorder but soon decided his talent was best served singing! He first started performing in bands at the age of 23. After joining Shadows in Red in 2008 he began writing and has written the lyrics for nearly all of the bands original tunes. His musical influences include Avenged Sevenfold, Elton John, Billy Joel and The Steve Miller Band, but his greatest inspiration is his father who is also a talented singer and songwriter. Taylor states that “the build up and pre- show adrenalin” is what makes for a great performance and for his song writing abilities.

Joe Mottmiller (bass/backup vocals): Joe has an extensive musical background playing several instruments including the guitar, piano and even the clarinet. He first learned to play the piano when he was 7 years old and later began playing the clarinet at age 10 followed by the guitar at age 15. In fact he didn’t even pick up a bass until he was 23 years old when his friend’s band was in need of a bass player. Before joining Shadows in Red in 2008 Joe served as the bassist for the band Sevrum along side friend and guitarist Brad Smith. His influences include Tool, Mudvayne, Alice in Chains, Smashing Pumpkins, and Sevendust. Joe’s favorite part of performing on stage is “the energy from the crowd.”

Brad Smith (lead guitar): Brad first began playing piano when he was in 4th grade, it wasn’t until later at the age of 20 that he took interest in the guitar and has been playing ever since. Brad also played guitar in the band Sevrum along with bassist Joe Mottmiller. He joined Shadows in Red in 2008 as the lead guitar player and has contributed in writing the bands original music. His influences include AC/DC, Led Zeppelin, Tool, All That Remains, and Killswitch Engage. He attributes his inspiration as a guitarist to Jimmy Page of Led Zeppelin.

Ted Keil (drums): Ted started playing the drums when he was 12 years old after his grandfather bought him his first drum set. Interestingly enough he initially started by playing polka music but later evolved into the heavier sounds of rock music. Before becoming the drummer of Shadows in Red in 2008 he played the drums in numerous other bands including Madea, Little Green Men, Tepid, and Majestic. Throughout his experience as a drummer Ted has opened for bands such as Seven Mary Three and Great White. Ted’s influences include Dream Theatre, Sevendust, Mudvayne, Circus Maximus, Pantera, and Duran Duran. His favorite part of performing on stage is “getting away with beating something without getting arrested!”

Eric Minkowski (guitar): Eric, affectionately known as “Ponch” by his band mates, is the newest addition to Shadows in Red joining in June 2010 as a second guitar player. He has been playing guitar since the age of 12. Prior to joining Shadows in Red he played guitar in several cover tune bands. The nickname “Ponch” was coined by the band members due to his resemblance to Erik Estrada’s character in the popular TV show Chips. When Eric is not jamming with the band he spends his time at the gym working on his physique. His influences include Guns N Roses, Stone Temple Pilots, and Shinedown. Eric loves the feeling and the rush from performing live on stage, and interacting with the crowd to get them as excited as he is