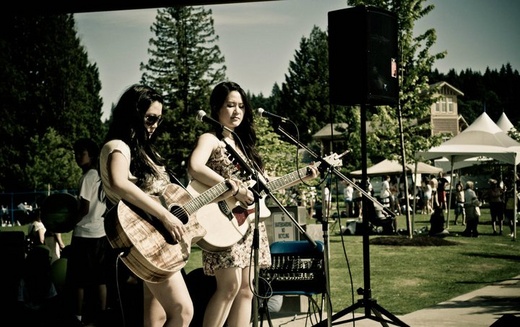 Sisters Sharmaine and Luvena Kwong started making music together 15 years ago, when they were just little girls sharing the family piano in their Coquitlam home. With classical training in piano and dance that started in preschool, annual recitals and competitions sparked their interest in the performing arts.  Along with a passion for writing poetry and songs that emerged in their early teenage years, the sisters (aged 20 and 21) are now showcasing their talents as a singing and songwriting team whose star is on the rise.

Now spending more time on guitar than piano, Sharmaine and Luvena – who say they have “twin-like telepathy without being twins” – collaborate to write original music that combines mellow acoustic riffs with emotional lyrics to create a signature sound.

And it’s a sound that’s catching on. After playing several local open mics in the summer of 2009, the sisters went on to perform at bigger events.  They were part of the musical lineup at the Port Coquitlam Winter Artisans Fair, Gleneagle’s Voices 2010, Music for Malaria 2010, and were hired to play music at the SFU President’s Seasonal Reception. Their more recent performances include Golden Spike Days Festival, Crossroads Hospice Music Showcase at Music in the Park, Village Vibe Series, Pecha Kucha Night, and Brentwood Town Centre’s Sizzling Sounds of Summer.  Sharmaine and Luvena have been scheduled to appear at Summerfest, Lunchtime Concert Series, Spirit Square Farmers Market, Whonnock Lake day, along with encore performances at the Village Vibe series as well as Sizzling Sounds of Summer.

Adding to their list of accomplishments, they finished in the top 15 for the Shout it Out with Hanson contest and are in the running to be EMI’s Next Superstar.

With nearly 900,000 upload views and 1590 subscribers on their sharmaineandluvena YouTube channel, as well as 7,000 channel views on MySpace, the girls have connected with a fan base that’s drawn to their easy-listening pop-country tunes.  They translated that following into a win in CMT’s Ultimate Fan Access contest, securing the most votes for a video that featured Luvena doing a parody rap.  And with an endorsement deal from Daisy Rock Guitars as well as an appearance in the Taylor Swift: Ultimate Fan Access special on CMT, Sharmaine and Luvena are ready to break into the big time.