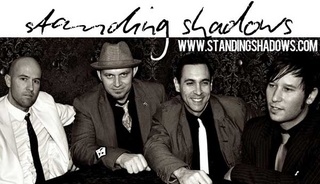 Los Angeles based alt-rock-electro band STANDING SHADOWS combine the attitude of Interpol, the soundscapes and emotion of Radiohead, and the epic percussion and performance of Muse... forming an alternative-electro-rock show that is breathtaking, jaw-dropping, and crowd-rallying.

With over 80 shows under their belts in the last 18 months, Standing Shadows continue to develop and perfect their ever evolving live performance. With smoke machines, strobe lights, live projection video manipulation, and the intensity of a stadium show, Standing Shadows lead the crowd on a musical-visual epic journey with every performance.

"Standing Shadows want to be a big rock band. It’s apparent from every outsized melody and synth-drenched soundscape on the L.A. quartet’s debut album "Five Years of Darkness" (2010), if not from their live show, which is heavy on smoke, strobes and in-your-face volume. Standing Shadows’ electro-rock toggles between Floydian edginess and the hyper-emotional bombast you might hear from the likes of Shiny Toy Guns (though never quite that preening). If they’re going for Muse, they’re headed in the right direction." - Buzzbands.la

So far in 2011, Standing Shadows have done the following:
-reached over 115,000 views on their latest video "We Are Everlasting"
-released "The Silent Revolution" EP, debuting on iTunes Alternative 'New and Noteworthy' section for 2 weeks, and Top 30 Myspace New Release of the week
-garnered airplay on over 110 College Radio Stations, including heavy rotation at over 40 stations, and several official CMJ adds
-Toured the West on our way to our 2nd consecutive SXSW showcases
-headlined shows @ the Viper Room, Roxy, Satellite (formerly Spaceland), and Troubadour (Nov. 2010)
-released "One Way Ride Remix" EP, with winners from our 2010 Remix Contest on Indabamusic.com

Standing Shadows are excited to announce their plans to collaborate with veteran Producer Chris Goss (Queens of the Stone Age, UNKLE, The Duke Spirit) in June/July of this year at his desert studio Rancho De La Luna.

“We all want to make a stand for something, but are hidden in the shadows without a voice. This is what unites us all. We Are The Human Race"