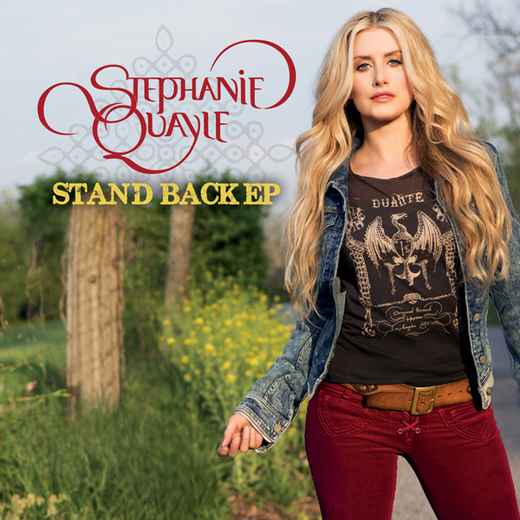 “Singing gives me a sense of freedom like nothing else.”

As the commercial says, sometimes life comes at you fast.  So fast, in fact, that it can rock your world and change your life forever in the time it takes to write a song lyric.  Just ask Stephanie Quayle.  Growing up on a farm in Bozeman, Montana, Stephanie always loved music and always dreamed of a career in country.  But it took two life-changing events to bring her to Nashville and to the career that’s now unfolding with the release of her EP, Stand Back.

When Stephanie was 16, she spent a year overseas in Switzerland on an exchange program.  While there, she auditioned for a band that needed a singer.  Not only did the band hire her for their shows, she ended up writing songs and recording an album with them.  In the process, Stephanie discovered her calling in life.  “It was when I was in Switzerland that I knew,” she says. “That was the first time I realized music could be my life.  Up until then, music had been talked about as a hobby, not like it could be a career.  I told myself then, no matter what, this is going to be my life.”

After graduation from high school, Stephanie worked for a few months to save money, then packed up her car and headed to Los Angeles with “just me, my guitar and my little three-chord songs.” But California was not the place for a young songstress from Montana who wanted to play country music. Stephanie supported herself through a series of jobs, including hostessing and working in retail clothing shops.  Her music dream seemed a long way from reality. “There were a lot of opportunities that came my way,” she says, “but everyone was trying to make me into something other than who I was.” These experiences helped build her character and steeled her resolve to stay true to the music she wanted to make.

After the tragic loss of a loved one – one that shook Stephanie’s world to the core – she realized that her voice and her music had the power to make an impact.  She wanted her music to mean more, to empower others through her story of inner strength, endurance and survival.  Stephanie turned the tragedy into a symbolic moment in her life and an ultimate triumph that led to the recording of her debut album, Ain’t No Housewife.  Her songs and stories started to make the positive impact she’d hoped they would. She became relentless in her quest to be a voice of empathy, joy and laughter.  And in the process, she realized that where she needed to be was Nashville.

Stephanie made the move to Music City in the fall of 2011.  She set out to learn all she could about Nashville, watching songwriter rounds and showcases, meeting other writers, and starting to co-write and perform. She networked, made friends, and followed up on leads that came her way.  Meanwhile, she continued to support herself by touring, playing corporate functions, private events, and gigs with her band.

Things changed professionally when Stephanie came to the attention of Dale Libby, a happily-retired 38-year music industry veteran and former Senior Vice President of Sales for Sony Nashville. Intrigued by what he heard, Libby found himself taking on an increasingly-valuable mentoring role in the singer/songwriter’s career.  Eventually, Stephanie’s unstoppable determination and drive inspired Dale’s return to the music business as her manager.

With the release of Stand Back, Stephanie takes a giant step forward.   In the album’s high-spirited, romp-sass arrangements and rip-torn vocal vulnerability, each song delivers a memorable punch that resonates with listeners.   Whether sashaying through the spunky tongue-in-cheek “Love Stuck,”  poignantly setting the stage for ultimate denial in “Pictures Lie,”  or defiantly powerhousing through the  CD’s title cut, Stephanie goes at it full throttle with a spirit of unbridled energy and empowerment.

While she has yet to realize her dream of playing the Grand Ole Opry or performing at the legendary Ryman Auditorium, Stephanie has already logged an unusually impressive performance portfolio.  She’s appeared three times at the prestigious Sundance Film Festival, sung at the U.S. Navy’s “Fleet Week” in San Francisco, and was personally asked by Maria Shriver to perform for an audience of over 14,000 at Shriver’s National Women’s Conference in 2010 and 2011.  The Girls for a Change organization featured one of her self-penned songs, “Be Who You Are,” as an inspirational conference theme.   Last year, the Amway Corporation licensed her song, “You Inspire Me,” inviting Stephanie to perform the song live for over 3,500 people at its annual Amway Achievers event.  She has also written and recorded a theme song (“Big Blue Town”) for Sea Save Foundation, which features the artist in a public service video shot in the Cayman Islands.

An active You Tube, Twitter and Facebook user, Stephanie has built an enthusiastic fan base around the world.  Her international appeal was broadened in 2012 when she performed and signed autographs at the CMA Music Festival in Nashville.  This year, Stephanie returned to the sellout event to showcase her talent on the Transitions Stage and visit with hundreds of fans at an after-show meet’n’greet.

Like the title of her song “Rollercoaster,” Stephanie’s life right now is a whirlwind, but that’s just fine with her.  After all, it’s what this singer/songwriter has dreamed of ever since her childhood back in Bozeman, and she’s reaching out for the brass ring with everything she’s got.  As she puts it, “I want to keep on building memories.  I want my music to be the soundtrack for everyone’s lives.”