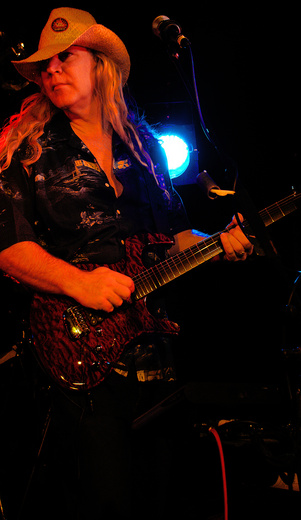 Living in the heart of Alaska, Stephen works at writing lyrics and composing music in his secret hideaway. He played in several bands throughout the northwest United States over the years, such as, "The Dirty Nickel Band", "Midnight Sun", "The Press", "Revolver", "Relayer", "Drivin Sidewayz", "Kid Liberty", and is currently workin' in the southern rock / country duo, "ARLY-JYLZ" and the rock group, "M.K.G Alaska". He records at his little studio hidden in North Pole, Alaska. It is a small 56 track digital studio, that he salvaged from his partnership with CMS Productions. He collects guitars, violins, basses, ukuleles and just about every kind of instrument he can get his hands on. Stephen says: I play Ibanez, Parker, Takamine, ESP, Ovation Guitars, through Peavey JSX and XXL heads and a Marshall Plexi head through Marshall 4 by 12 and 2 by 12 cabinets. Violins include 2 DAL Luthier GV Ultra 5 string violins, as well as several Meisel four string violins. Many Boss pedals including a GT5 and GT8, and VG99 multi effects processors. I have a Dobro, and I actually have an Accordian, as well as several Mele Ukuleles from Maui. Everything is recorded on Roland VSR880s, with Fantom G7s, Fantom X7 and GT Synth through a Roland VM7200, 94 channel mixer, and Sonar in the laptop computer.