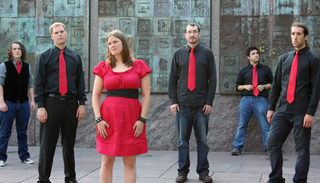 Hailing from Washington, DC Sweet Interference is a unique indie rock band that combines a wide arrange of musical influences to create their own blend of music. The core of Sweet Interference is a 5 piece group consisting of: Moira Annelin (vocals), Chris Cortelyou (drums/guitar), Josh Klein (synth/guitar/drums/vocals), Alex Marsh (bass), and Zach Mast (keys/guitar/vocals). Sweet Interference is frequently joined by additional guest musicians for recordings and shows so audiences can expect lost of instrument switching and set ups during a performance.

Sweet Interference has been described as Rilo Kiley crossed with Weezer. Their music is melodic indie-rock reminiscent of early Pixies and Modest Mouse with a hint of The Rentals. Their songs deal with themes of frustration in the modern world. “We are frustrated with life and the situations we’ve gotten ourselves into,” explains Chris, “and we can commiserate with you because we know you are frustrated too.”

Sweet Interference has been playing together for over three years and has developed a loyal local following. They have played venues all over town including the Rock and Roll Hotel, the Velvet Lounge and The Red and Black. Sweet Interference has garnered press mentions in publications like DCist, Skratch Magazine and Express Night Out (Finalist for “Best Of DC”, Best Local Artist). They have also played shows in Baltimore and Richmond in additional to many shows at Northern Virginia venues.