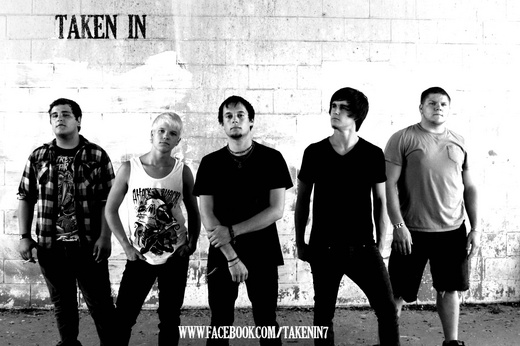 Taken In is a high energy rock band whose stage presence and intense shows sets them apart from other bands. The band started in Mooresville, Indiana with Kyle and a few of his friends as members. After a few years of trying different guitarists & drummers, the band finally found the right combination & sound that they were looking for in the current members. The band kicked off their career in the summer of 2009 with a local Battle of the Bands contest. In the battle, they beat many of the local, established bands and took home their first prize. It wasn't long before they were playing shows all around the county and building up a strong fan base in the west and southern regions of Indiana by playing at many dance clubs & parties. In the summer of 2010 they recorded the new EP "Apocalyptic sickness witch will be distributed exclusively at their shows. With musical influences raning from Bullet for My Valentine, Atreyu, and A Day to Remember, the EP features intricate guitar parts and driving rhythms that showcase their original hard rock style. kyle marcum- lead vocals, cody couch- lead guitar, andrew jobes- guitar, blake garland- drums, zach lawson- bass