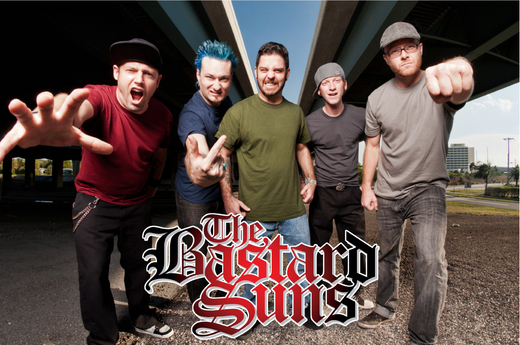 About The Bastard Suns

The Bastard Suns are a four-piece sonic assault vehicle. In just under 9 years, this Atlanta band has managed to release two full-length albums and five EPs, punctuated by 2009’s ultra-popular full-length Here Come the Suns, and most recently, 2011’s A Band for All Seasons. With the help of several national radio stations and sponsors like Silver Surfer Vaporizers and Sacred Custom Percussion, the band has amassed hundreds of thousands of views on YouTube, including the video for their single S.B.M.T., which has over 100,000 views alone. Their tours are completely self-funded, and have spanned the length of the U.S. over a dozen times, including countless East Coast and southern tours.

The Bastard Suns have always set themselves apart by seamlessly blending their primary influences (punk, ska, bluegrass, folk and reggae) into a live show that borders on a religious experience. What began as a small grassroots campaign is quickly turning into a full-blown national following and it seems that The Bastards are only just now hitting their creative stride. With 2013 approaching, the boys are planning a massive Fall National Tour and are currently finishing up material for a third full-length album. Make ready, because Here Come the Suns.

“The Bastard Suns are one of the best up and coming groups from out of the Southeast. Every show they play they bring out more and more fans and they all leave satisfied and wanting more.” Tim Sweetwood – Talent Buyer, Masquerade Atlanta

“The Bastard Suns are a must have. Their high energy live performances captivate audiences and keep them coming back for more.” North River Tavern, Sandy Springs, GA

“If Sublime and The Dropkick Murphy’s had children, they would be Bastard Suns.” Smith's Olde Bar in Atlanta, GA