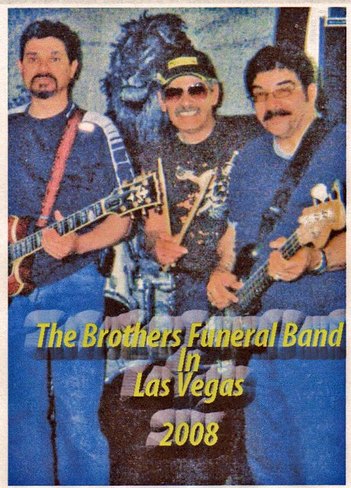 Our Story is the same as many garage band. We played many different venues . From local parties to night clubs in the 70's. During the time period of the Vietnam war we all volunteer and join the U.S Navy. After our military service we all went our separate ways.

In 2006 we decided to get the band together and meet once a year. This would be some feat seeing that we all lived in different parts of the US.

We started doing three way conference by phone and snail mailing each other music ideas and arrangement for new songs. Practicing on our own. Our first meeting in 2007 let us know that two thirds of the band was not ready. After that we improve with each meeting. By 2009 our third meeting we record six original songs. In 2010 we played at my high school reunion. in 2011 recorded Six more original songs and put all 12 songs on this EP Titled, My Eyes are Shy. We hope everyone will enjoy our songs.

The Brothers Funeral Band AKA TBF Band are;

Armando Romero on Vocals and Drums,

Joe Romero on Vocals and Guitar

Julian Romero on Vocals and Bass