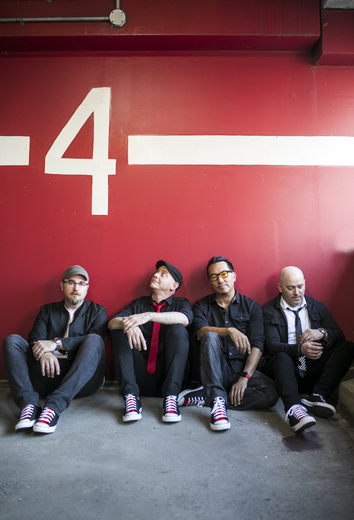 2012 brings the fifth release from indie-rock band The Jellybricks (Pop Detective/Primitive Records). Suckers is the highly anticipated follow-up to 2008's Goodnight to Everyone. Counter to their usual process, the 'Bricks headed straight for the studio to record the new tunes before ever performing them in front of an audience. Recording began in the spring of 2011, and wrapped up in September, producing a total of five brand new songs and two bonus tracks.

With Goodnight to Everyone, The Jellybricks garnered early press from Rolling Stone, which called their video for the single "Ruin Us" "the first truly clever viral video of 2009." This led to a successful AAA/non-comm radio campaign, with the band hitting the road hard in support of the record, touring up and down the East coast, and gaining more supporters with every venue they played. It was during this time that the band wrote the songs that would appear on Suckers.

Suckers breaks from the polished power-pop sound The Jellybricks have perfected over the years. "Our results were some of the most spontaneous creations of our career," notes Larry Kennedy. "Suckers is one of the fastest, bare-bones records we've made, with mostly first-take live performances," and takes on a grittier, rock 'n' roll edge, although the band's affinity for tight harmonies remains as strong as ever. This sound is most evident on "Rock 'n' Roll Suicide," as well as on "Sold" and "Dead End Girl." Rounding out the release, "Their Own Way" and "Someone Else" also benefit from the edgier sound and production. As always, the contrast between hard and soft is the perfect embodiment of the band's name.