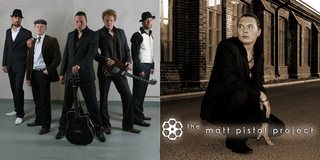 About The Matt Pistol Project

About The Matt Pistol Project

The Matt Pistol Project was formed around the year 2000 when two friends Hannu and Peter were enjoying playing guitar and writing songs. Devoted to their cause these two friends kept on playing and formed a solid team of songwriter and lead guitarist

The band signed a management deal with Petri Ekman and Koetinkivi Oy in the beginning of the year 2006 and soon after that the band started working with producer Michael Blair (who has performed with Tom Waits, Lou Reed, Elvis Costello... produced Ryan Adams, Soul Asylum...). The Matt Pistol Project recorded four songs in April 2006 with Mr. Michael Blair. On April 2007 the band signed a publishing deal with the Stockholm based MARSONGS Publishing. On August 2007 the band was given the opportunity to be the supporting act for legendary Bonnie Tyler in her show in Finland.

These songs have a strong meaning to the band and it’s singer- songwriter Hannu and they’re delivering meaningful images thru stories from different sides of life - its up and downs and heavens and hells.

The deep, dark and beautiful Matt Pistol Project-journey has begun

"It is an honor and a pleasure to collaborate with The Matt Pistol Project. Hannu and the band have angels and devils firmly planted on their shoulders. This conflict creates music that shoots straight out from their very big hearts. They express genuine feelings with well structured songs, and I am fortunate to be able to work with them in this environment. Listen closely.