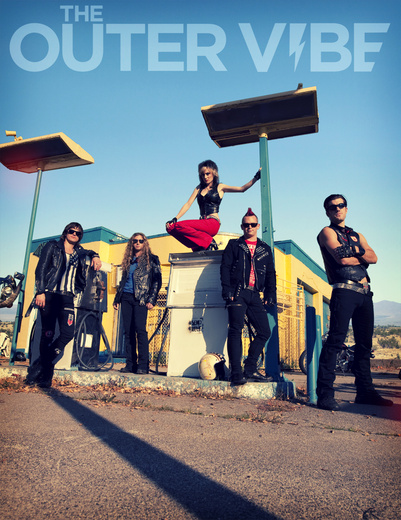 About The Outer Vibe

The Outer Vibe is the revival of rock and roll's classic power and free thinking soul. The high energy 5 piece group uses trumpet and keys to color their Led Zeppelin, Queen, and Chicago-inspired music. Their sound is an innovative take on rock music's most timeless elements, which pays tribute to the voice that screamed out in the 1960's and 70's for change and freedom.

The Outer Vibe has independently recorded and produced 3 full-length albums, and has sold approximately 1500 CDs in the past year. They are currently gathering material for a fourth full length album.

The group is known to fill up to a 900-person capacity concert venue (i.e. Grand Rapids rock club staple, The Intersection). In the most recent year The Outer Vibe has played over 50 shows within a 200-mile radius.

97.9 WGRD, Grand Rapids’ most listened-to rock station, selected the song “Anybody Home” from The Outer Vibe’s 2006 release “Games We Play” to be a part of the WGRD Bootleg compilation CD. The Outer Vibe's music has aired on a Clear Channel Communications radio station, 101.3 The Fox, as well as numerous independent and college radio stations. The band has organized, hosted and performed at their own large scale local music showcase, titled The Big Gig, featuring a number of West Michigan artists.

The Outer Vibe performed at Fox Fest 2006, opening for REO Speedwagon and the Tubes, a result of winning the 13th annual Aris Hampers Hometown Rock Search. They have also taken first place in the 91.5 WHMW's 2005 Battle of the Bands, the 2004 97.9 WGRD Big Break Contest, and the 2001 West Michigan High School Battle of the Bands.

At the annual Grand Rapids Festival of the Arts (the biggest volunteer-run event in the nation), The Outer Vibe consistently has the highest CD sales of any musical act.

Other accomplishments of the band: