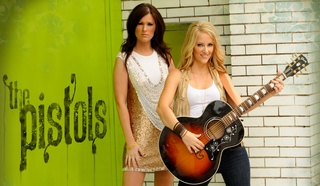 Not sisters,not childhood besties, not "put together" by some reality show..
simply two determined, driven and talented vocalists who by a chance meeting at a nightclub in music city over 2 years ago...have teamed up to become a powerful dose of kick ass.
The Pistols relocated from opposite sides Nashville;each one directly after finishing up high school.Alissa from Indiana and Kerri-Ann from Colorado had years of performing under their rhinestone studded belts prior to meeting eachother. It was never in their individual plans to be in a vocal group, life at its best.. just happened.
As a duo , The Pistols are a deadly combination. Each has a unique voice and attitude that fuels the other.
As of today, Alisa and Kerri-Ann have signed on with Bobby Roberts Booking Agency.The Pistols are doing what they love, making hundreds of new fans everytime they hit the road!
Check out more on the chicks @ myspace.com/thepistolsmusic