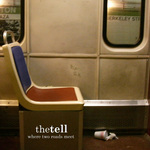 The Tell officially formed in Chapel Hill, NC in mid-2005 when guitarist/lead vocalist Alex Michaud and drummer Dave Krusch came together to record the tracks that would eventually become their debut album, "Where Two Roads Meet."

The collaboration began in the summer of 2004 when the two began jamming in the backwoods of the North Georgia mountains with simply an acoustic guitar and hand drums. Even though they came from two entirely different musical backgrounds - Alex, from a rock/singer-songwriter style, and Dave with his background in fusion-funk drumming and world percussion - an instant connection was made.

In 2005, the duo decided to take their music a step further and put their ideas to tape. Over the course of a trial-by-fire, intense marathon recording session at Nightsound Studios in Carrboro, NC under the direction of head engineer/producer Chris Wimberley, The Tell was born. What resulted was an adventurous, sparkling collection of original songs, combining a high degree of technical ability with killer hooks and poignant lyrics about love, life, and everything in between. From the powerful opening track, "On My Own," which was written in the studio during a session, to the Police-esque vibe of "Who Am I?" and the political-tinged rock of "Free World," The Tell showcases a wide range of styles and influences.

Bringing together elements of groove-laden rock, acoustic roots music and power pop, "Where Two Roads Meet" is the culmination of a creative process that was over three years in the making.