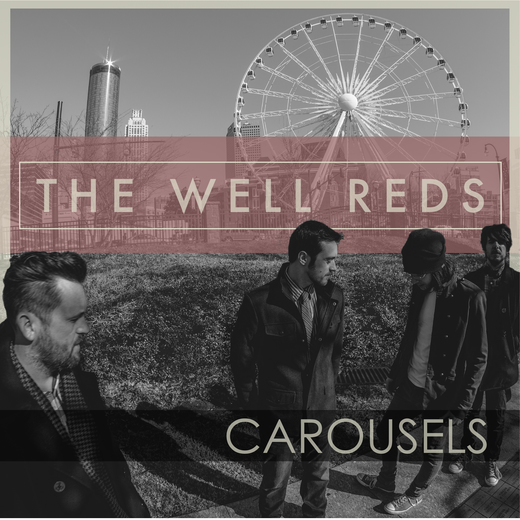 About The Well Reds

"Hailing from Atlanta, Georgia ... The Well Reds is an Alt-Pop Rock band that is the epitome of pure musical bliss. These guys have taken all their life experiences and inner energy and combined them to create songs that are so relatable that they grab at your heartstrings while stimulating your brain stem. If you are a fan of amazing well written songs sung by a singer who makes you feel like you have known him all your life, you will love The Well Reds as much as we do. Big radio songs filled with energy, passion, and emotion. Love this band!" -Daily Unsigned It all comes back to the performance and it all builds up to the performance. It doesn't matter if it's a showcase in NY or LA, a tent in North Dakota, or a baseball field in Texas. The stage cuts through the tricks and demands honesty. Experience builds confidence, and confidence allows for consistency. A high level of consistency combined with really caring provides the platform to connect with someone, even if they dont know who you are yet.We're The Well Reds from Atlanta, GA. Home of the Braves, Waffle House, and Coca-Cola.  Soon we'll be releasing a new collection of songs that catalogue the highs and lows we've experienced personally and professionally as members of an independent touring band. We make music for the masses, we write songs that ask people to feel and move without placing any limitations or expectations on what they should think or experience. We're musicians because it's wired into our bones, inherited from professional musicians and musically inclined parents who proliferated a deep appreciation for the arts and an understanding that music matters, that performance matters.It's through this understanding and with the support of friends, family, fans, and strangers alike that we've been able to invest so much of ourselves into the band, along the way notching up life experiences and collecting glimpses of what we want this band to be, of what we think this band can achieve. We've seen urban sunsets and country sunrises, our newest van recently hit 100,000 miles and the one before had the transmission fall out twice. We've played in the heat, in the cold, on big stages and small, for sold out audiences that sing along and to people who just happened to be walking by.  You could describe our songs as thoughtful, consciously aware pop music. We engage with a pallet of tight vocal harmonies, diverse instrumentation, and a melodic sensibility that allows a new listener to feel familiar from the start. Some people grab onto the melodies and that's enough for them, others will relate to the lyrics. For many listeners, snippets of our stories will speak to parts of their own lives like a communal basket of interchangeable parts and puzzle pieces. Songs from our last EP Violet have won us national competitions, garnered coverage and usage through many digital and traditional media outlets, and allowed us to perform meaningful shows all over the country. After a performance at Canal Room in NY, Bruce Tyler (former VP of Sony Music) told us that ... "I think after that performance you separated yourself from other artists trying to do the same thing, well done." For us as a band, each performance is that performance and we're hoping that this new music, recorded with Grammy Award Winning producer Joseph Prielozny, provides us with an opportunity to elevate ourselves and our group onto larger stages. It all comes back to the performance, and its all building to the next performance.
EVENTS AND ACCOMPLISHMENTS:

“Composed of seasoned musicians and a uniquely distinctive sound, The Well Reds’ tailored orchestration of emotional yet mature pop anthems will have you humming the melody and singing the lyrics just after one listen.” - Mixtape Atlanta

“The Well Reds’ Alternative Rock sound emphasizes on the acute collaboration of pop influenced vocals, deep piano harmonies mixed-in with some vivacious and solid guitar licks. Their tunes carry the catchiness of the pop genre, but this band induces quite the rock vitality throughout their set hitting each note harder than the one before while connecting passionately to very line delivered. ”                        - Black Vinyl Magazine - Florida Music Festival Day 1 2011

“Hailing from Atlanta, Georgia…The Well Reds is an Alt-Pop Rock band that is the epitome of pure musical bliss. These guys have taken all of their life experiences and inner energy and combined them to create songs that are so relatable that they grab at your heartstrings while stimulating your brain stem. If you are a fan of amazing well written songs sung by a singer who makes you feel like you have known him all your life, you will love The Well Reds as much as we do. Big radio songs filled with energy, passion and emotion. Love this band!”      -Daily Unsigned

“The votes are in, the battles are over and a Grand Prize winner (NMS 2011 Live @ Roxy) has been confirmed. Meet The Well Reds, an Atlanta pop-rock quartet whose song “6 More Months” rose all the way to the top… ”  - Ourstage

“The Well Reds new EP, ‘Violet’, is a brilliant Pop/Rock album. As soon as the title track starts you know it’s going to be good. Following up the first song, the other tracks try out different tempos and hooks, but never stray from a platinum selling polish.”     -The Album Project

“Great alternative pop/rock songwriting, excellent harmonies, and a mature and intricate “wall-of-sound” feel in their songs with great dynamics. These guys are serious about their music. ” Two Faces Radio

“The Well Reds really connect with you through their authentic and straightforward lyrics. Listening to The Well Reds is feeling their pain, love, sorrow, and joy and almost unknowingly provoking similar emotions of your own. ” - Matt Shamus - Disk Revolt

“Listened to their EP, Violet, on ReverbNation. DUG what I was hearing. Great melodies. Soaring vocals. Pounding piano keys. Queen meets Crash Kings. So I downloaded the EP and I cannot stop listening to it. ” www.jrsygyrl.com

“The Well Reds brilliantly tackled “Bohemian Rhapsody’” nailing all the vocals and music notes… Prog-rock was finally represented as The Well Reds absolutely demolished “Tom Sawyer” by Rush (you would be hard pressed to find a better version even from the lips of Geddy Lee Himself).” - MIxtape Atlanta on TWREDS' 500 Songs For Kids Perfomances

“Their music is an extraordinary combination of haunting melody and relentless rhythm, performed with passion and musicality.” -Steve Rucker fmr. Drummer The Bee Gees, UM Frost School Of Music

“Keep an eye out for The Well Reds, the band has an awesome sound and excellent chemistry. Don’t be surprised when you see them headlining sold out shows!” -Zillionears

“All of the elements are right… This album is a total hit, the kind you can throw in your CD player and rock around Atlanta for hours, just admiring our beautiful city.” -beatlanta