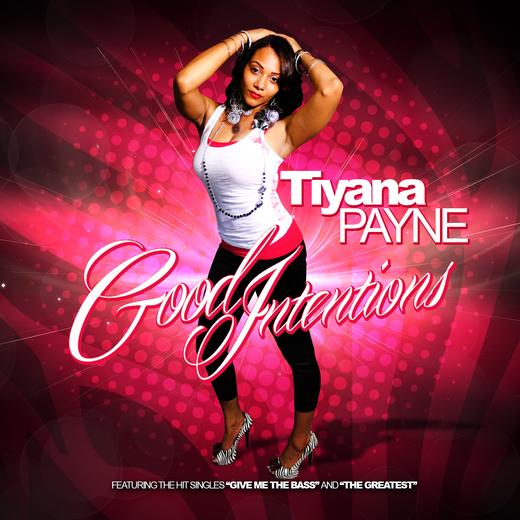 Tiyana Payne (formerly known as T-Baby)was born and raised in Columbus, Ohio. Raised by a single parent mother who played classic R&B from Earth, Wind, and Fire to Luther Vandross and Aretha Franklin, T-Baby developed a love for music at a young age.

Being an only child for 8 years, music provided her not only with entertainment, but with people and situations to relate to. She enjoyed listening and as a result began writing music of her own at the early age of 6. Growing up on BET and MTV, hip hop began to peak her interest around the early nineties and even more so when rappers like Tupac, Biggie Smalls, Lil Kim and Foxy Brown emerged on the scene.

Tiyana originally wanted to be a singer, becoming a part of a singing group when she was just 11 that included three of her best friends at the time. They wrote songs and rehearsed at Tiyana’s mother’s house after school each day. After Tiyana’s voice began to mature she no longer seen herself as a singer and began to express her feelings and lyrics through poetry and rapping. Tiyana’s performing debut with rap occurred at a talent show held by her middle school where she rapped along with two of her friends.

Throughout high school Tiyana continued writing rhymes, but rarely rapped and performed because she was focused on school and working to save up for college. After receiving a full tuition academic scholarship to Ohio University, Tiyana began rapping and performing again on the campus in variety and talent shows. This time she performed with friend Brittany Hamlet a.k.a B-Ham. They began doing it for fun, but later decided that they wanted to become serious about their music and record a CD. They named their rap duo “So Exclusive”. Tiyana paid for studio time and original production with a number of local producers in the area, but wasn’t completely satisfied with the quality of the music.

Later after being turned away by numerous producers, recording engineers, and A&Rs at a music convention that claimed another female rap duo would never sell, T-Baby decided to go solo. Shortly after in the summer of 2006 she met Sinatra, a young local producer and founder of the independent label Chief Execs Entertainment. She was the first female artist to become a part of the label and dropped her debut album titled “Self-Centered”, in February of 2008. In June of 2009, Tiyana decided to pursue her music on her own and without the help of an independent label so resigned from Chief Execs Entertainment.

In the late summer of 2010 Tiyana independently released her second album titled "Everything".  This album got Tiyana a lot of recognition, but due to financial constraints she was not able to market it properly.

Earning much respect and admiration locally for her mixtape appearances, her independent albums, as well as her local performances, Tiyana is fully equipped, capable, and ready to become a nationally recognized recording artist.

Tiyana won a competition in May 2008 that landed her a spot on BET's 106 & Park's Wild Out Wednesdays. She performed on Wild Out Wednesdays along with R & B singer Jlorraine on March 11, 2009. She also won 2nd place in BET 106 & Park show writer Pat Charle's "Blaze the Stage", a competition held in New York that provides up and coming hip hop, R&B, and dance artists with the opportunity to showcase their talent in August of 2008.

This year, Tiyana is back with her new album titled "Good Intentions" scheduled for release on 9/22/12.  This album is also independently funded by Tiyana.

Her distinctive lyrics, umatched drive, unique style, dynamic performance, and positive influence all set her aside from traditional female rappers in the industry and place her in a league of her own. Tiyana's ambition, confidence, work ethics, and strong determination are all reasons why she is destined to be a success in the industry.