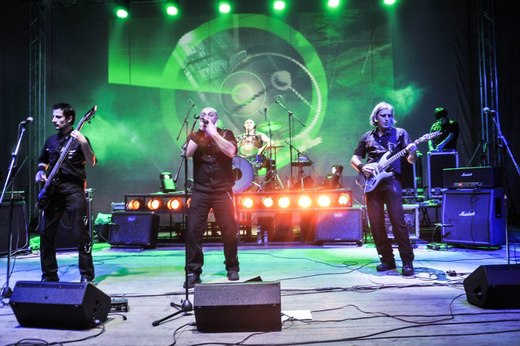 The group “Industrial City” is one of the successful, new generation groups of Georgia, appeared after the collapse of the Soviet regime. In fact, they are the pioneers of this style in country, offering powerful and melodic Industrial metal.

The first steps of the group began in 1997. “Triple Jump” – it was the name of the band, created by 2 friends – Levan Kekelia and Jemal Mirzashvili . The style they played was classic rock and hard rock synthesis, influenced by the legendary Deep Purple, Rainbow, Ronnie James Dio, Rainbow, Led Zeppelin and Black Sabbath.

After 3 years intensive work and some gigs, due to the limitations of the common situation in the country such as limitations of this kind of music, the group was forced to finish it´s existence.

During the next 8 years, 2 members of the former group – Levan Kekelia (Lead Guitar) and Jemal Mirzashvili (Vocal) have been working in different musical projects and experiments.

In the year 2010 they decided to move in direction of industrial metal and founded the new band “Industrial City”. Having good experience, the guys created compositions and began participation on the local musical events and fests.

Strong melodic lines, hard base and powerful vocal give took them success and an army of fans in Georgia, Azerbaijan and Armenia, won all the important competitions in Georgia in field of heavy music, such:

Zura Ivanane – Bass, Nikoloz “Masa” Bakradze – Drums) is working on it´s first CD and having big ambitions to take the battle and win in every Heavy Music fields!