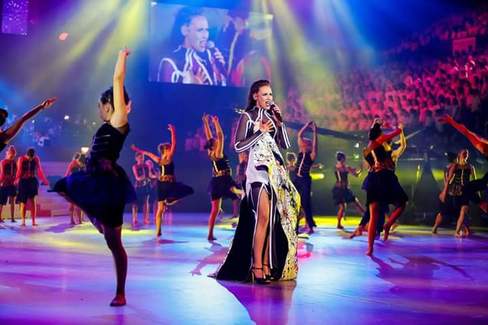 With her powerhouse vocals and raw lyrics, NINA is ready to take the pop genre by storm! Bringing you funky tunes with an undertone of pop, NINA's beats are sure to get you grooving!

Since graduating the renowned Talent Development Program (TDP), NINA's music career has taken off with performances on The Morning Show and the Gold Coast Multicultural Festival. Well on her way to gaining a national following, NINA also established her own entertainment business, NINA Entertainment and she has since produced and directed 'The Nina Baumer Experience' which sold out in a matter of 20 minutes.

In July 2015, Greg Agar at Sony Records, recorded NINA's first EP, 'Is It Worth It?' written by NINA and supported by The Treehouse Children. NINA also recorded 'Home and Away' with Matt Ottely at Ottely Studios for his visual book 'Home and Away'.

Combining passion, determination and incredible talent, NINA has her sights firmly set on producing a solo album. Furthermore, NINA's undeniable commitment to the music industry has lead her to becoming accepted to attend Berklee College of Music in Boston, USA.

With her down to earth attitude and her love for performing, NINA is a young diva to watch out for!