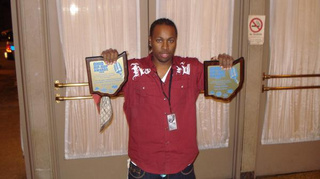 Young Shank was in a raised life no one would choose. Coming from the Bronx, New York but raised in Cleveland all his life by his Mother not having a father figure till the age of 7. Shank had a very life changing moment, his mother was shot and killed when he was younger, it was a few months before his birthday. After that it was bouncing around houses from his aunts and grandmother, Shank being the oldest of 6 siblings, had alot of weight on his shoulders. Having to raise his brothers and sisters didn't give Shank the opportunity to concentrate on school. Having to resort to the hustle that was pumping in his blood he did what he had to do to help support and take care of his family. After getting into alot of trouble and living a life of tragedy and death. He was inspired to rap when he found out that his mother used to rap back in the day. Other notable inspirations are A.Z, Shyne and B.G. He started Rapping 3 years ago over instrumentals of the popular songs of his time but started to take it serious in the summer of 2006. Raised in the notorious "Garden Valley Projects" of Cleveland. Shank had alot of inspiration for writing alot of the urban youth can relate to his struggle whether its "the hustle, the struggle, the money, the sex, and the power" Shank says "People Are going to feel my music I can make em cry, make em laugh or make em rock in the club. My style is very unique and I gotta concieted swagger that people love...I make hott songs." In the most recent Shank lost his little brother on his fathers side, R.I.P Bobby Died at the age of twelve. He also had a younger brother who died at 8 months when Shank was younger. He has delt with alot of hard times and expects the worst but prays for the best. "I'm ready to put my city back on top and show people how we do it in Land....and yea I was born in the Bronx, New York but most of my life I've been here....I let my music speak for it-self. I'm one of the realest in the game I'm from Garden Valley projects on the east side of Cleveland, and I'm ready for whatever anybody can throw at me."
I'm one of the most promising rappers from Cleveland..........My style is very unique and I gotta concieted swagger that people love...